Through The Virtual Looking Glass

About a year ago or so, the idea of a book combined with a RL/SL art event was decided upon by the members of Caerleon Island in Second Life, lead by Professor Gary Zabel from the University of Massachusetts.   At this time I put together a dinner theatre type build/ performance called 4Jetpacks4  which you can see below.

Its a bit of an old video so please ignore the poor filming.  Since this build there have been others demonstrating different characteristics of how we interact within the virtual world.  The artists of Caerleon but especially Georg Jannick have spent an increadible amount of time setting up this event which started yesterday with a RL gallery show of Caerleon artists physical work and virtual work.  Tezcatlipoca Bisani turned up fashionably late to the Gallery show in Boston and took some pictures which I have included below.  Over 100 people turned up for the opening last night, which is pretty good for a gallery.  If you happen to be in Boston and wish to see the show, it will be running until the end of April.  In world you can pop over to Immersiva where there is an info booth at the telehub.  Clicking on the boxes to the right will give you are variety of useful information. http://slurl.com/secondlife/Immersiva/25/127/21 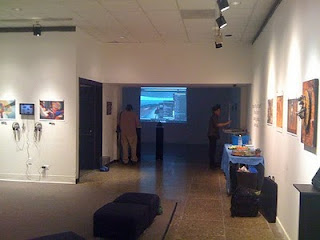 So for me this is the second time I have shown in real life as the virtual character Bryn Oh.  The first was at Nuit Blanche last year.  This concept has been something I have been working towards for, well, years now.  Showing alongside flesh and blood artists as a digital one.  I have always been fascinated with the idea of people seeing artwork in a gallery and looking to see who made it, only to be surprised and confused to find that it was a virtual artist with no connection to RL.  Just a collection of coloured dots.
I like to describe it this way.  Imagine going to a marionette show.  They dim the lights and as you watch, the marionettes cease to be string and wood creations controlled by a person, instead they take on a life of their own as you slowly become drawn in and your imagination is engaged.  If someone were to suddenly turn on the light in the theatre. you would see the person controlling the marionette and the suspention of disbelief would be broken.  But if the lights are kept off can that marionette remain a personality indefinately?  Its a part of the art concept of Immersiva.  To draw one into the virtual world allowing them to forget for a time their real life.  Bryn Oh is an extention of my artwork in SL.  She is designed no less than the builds I create. So now she has stepped through the looking glass and into RL with her machinima as well as some encaustic and wire music box insects (in the video below) 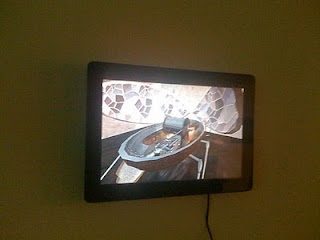 Below is the official write up for the event.  If you get a chance please check it out and let others know.

‘Through the Virtual Looking Glass ‘is a brand new exhibition of leading virtual artists. Showing intricate artworks simultaneously from the ‘Harbor Gallery’ at the University of Massachusetts, Boston and also at renowned galleries across France, Holland, Australia, Germany, and Brazil.


The Real Life exhibition will display virtual art by using computers, high quality digital frames, a digital projector, live video and audio streaming, and specially made digital interface devices accessing works in virtual worlds. It will also show prints, paintings, and sculptures based on art made in virtual worlds, some with embedded mechanical and electronic components.

Many of the artists whose work will be shown have established art careers, having exhibited in such venues as the Metropolitan Museum, the Museum of Modern Art, the Whitney Museum, and the DeCordova Museum in the United States as well as numerous well-known galleries and museums throughout Europe.

The final day will see a celebration event held RL at the Harbor Gallery and will stream live music into SL via the POP ART LAB sim.

Professor Gary Zabel (Georg Janick in Second Life) says of the event: “Two things inspired me to initiate ‘Through the Virtual Looking Glass.’ First I wanted to explore ways to break down the barriers that separate the real and virtual worlds by introducing virtual art to real world audiences. So much powerful art created in SL and other virtual worlds has been limited to rather small in-world audiences. We need to break it free of the confines of the virtual ghetto. The portal between the real and virtual worlds should allow art and audiences to pass through in both directions. Second I wanted to use the powerful networking capacities of SL to promote global artistic collaboration by developing a series of coordinated real world international art exhibitions. In addition to the Boston exhibition opening April 7, TTVLG exhibitions will be taking place over the next few months in France, Germany, Holland, Brazil, and Australia, each organized by leading figures in the world of virtual art. We have also developed a HUD that will allow SL residents to experience many of the artworks that are being exhibited in the real world galleries as well as participate in related musical and literary events. The organizers of TTVLG hope that these ‘crossover’ experiences will throw a spotlight on the power of virtual art to connect people across countries as well as worlds." 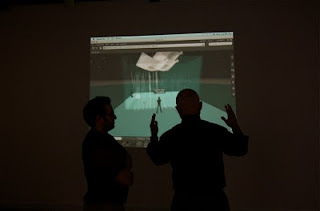 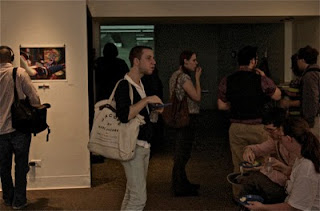 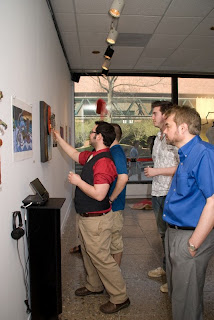