The second part of the build takes 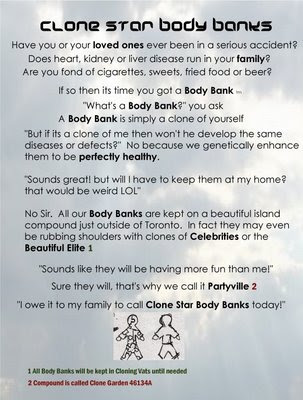 place in one of the residences built for
Heaven. In the machinima I make my way over to it but stop in the middle to look at a overturned shopping cart with a swarm of Beetlebots hovering over it. The Beetlebots have a somewhat elaborate story in my mind. Here it is.

In this future the society has placed the man made concept of consumerism over nature. The belief that an ever-expanding consumption of goods is essential to its economy drives policy rather than sustainable development or natures natural ability to heal itself. A result is the extinction of animals within the food chain as their habitat is harvested.
This would unbalance the food chain and result in chaos. For example, in Canada we have cycles where Foxes will get mange and die. The Rabbit population will explode due to a lack of predators. The following season the remaining Foxes will have a Rabbit buffet and grow in numbers until the Rabbits become scarce. Etc Etc. So should the Rabbit or Fox become extinct it would have a huge effect all along the food chain. In this future they might build mechanized foxes to keep the numbers of Rabbits down should the living Fox become extinct. 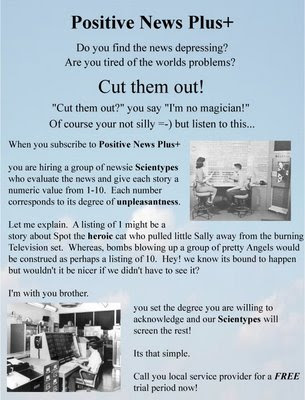 That is what the Beetlebots are to me. A replacement within the food chain. But its also an introduced species to Heaven. I think of them as arriving accidentally to Heaven within a crate of designer dog clothes or something. Its their Australia. They just slowly multiply and become an irritation. Beetlebots are the pests of Heaven I suppose. The overturned shopping cart is self explanatory.

From here we move on to the residence in Heaven. The architectual designers had the job of making a residence that was a nice shape which would allow a bunch of houses to be wedged into a small area for maximum profit. They also had to design something which would still allow people to imagine themselves in a paradise. Actually I would love to see how real life architects such as DB Bailey or Scope Cleaver would make a house in Heaven under these restrictions. Anyway, with this in mind I made the first portion of the house a mandatory area for advertising. You are not allowed to remove the advertising and essentially are a captive audience to the various companies with stakes in Heaven. But they only get your front hall. Like I mean fuck we do have our limits don't we? However, advertising under your pillow with a whispering machine would be handy too. From here I walk forward and am surprised by a glowing electro ball falling beside me. This came from the eye candy above. 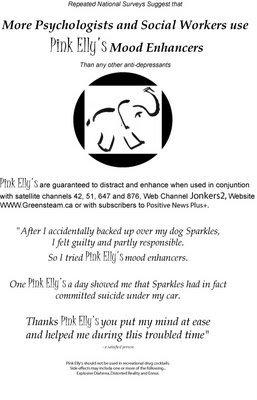 Modern art worthy of a home in Heaven. A sort of water fountain of the future. On the desk are a few things to create depth in the build. The first is a newspaper with a variety of recent stories about the conflict between Earth and Heaven. I will just post one page as an example at the bottom. If you click on the tape recorder you will hear, after a moment of loading, the voice of an old man. These recordings are taken from micro cassettes bought at a garage sale. The old man would tape messages to his son and mail them off to him. I found them poignant. Somehow sad. I imagined the old man who had a son that he always thought of and whos life still revolved around him. But the son quite likely is caught up in his own busy life, maybe not even listening to the tapes. In the drawer is a letter from their grand daughter. It is addressed only to Grandma. The man in the recording has passed away. Yet is already in Heaven. The build Condo's in Heaven is an ongoing idea for me. I may over time add more buildings which help to further tell the story of when the human race conquered Heaven, or it may live in my inventory. Go see it because I really don't know if it will come out again. If you ask to see it after its gone I am just going to orbit you. 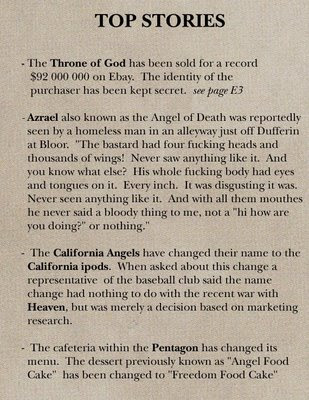 Gala Charron said…
I have visited this build I don't know how many times and seem to find something new each and every time I visit. You have created quite an experience, from the sound, to the sculptures, to the poetry scattered about. Thank you for sharing such an incredible build,
April 13, 2009 at 10:38 AM