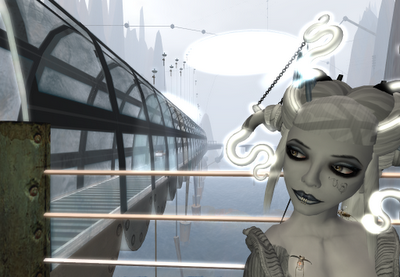 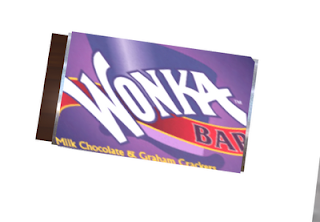 I was asked to make a build to demonstrate
Immersiveness for Georg Jannick. This build will
be featured in a real life art show at the University of Massachusetts in Boston in april of 2010. And should they receive a grant from the Warhol foundation this art show will travel for a year and will also feature a book. The book will have different chapters dealing with concepts related to second life. Each upcoming build will be headed by an artist and focusing on a single concept. My build is on Immersion.

The build I have made is a performance on a science facility. Its a bit like a play. Nonnatus Korhonnen and Glyph Graves contributed two fine creatures for the build and so far everyone has enjoyed it immensely.

Unfortunately, the build has only 6 shows of 10 avatars over three weeks. This is mainly because the build must perform lag free and having too many avs would ruin it due to the lag created. Also Nonn and Glyph are Australians which makes them on the opposite side of the world to me. This makes it extremely hard to get online together for shows. Soooooooo...

I am making the final weekend of shows open to those who find a ticket on immersiva. There are two shows with 20 spots available. What you are looking for is the wonka bar above which Tezcatlipoca Bisani gave me. Inside is the invite and a password to give me. Whoever finds them and gives me the password before i change it will be in. Send me your name and the password in a notecard.
Email Post

Goddess of color, Goddess of light
The lost who make their way here
The abandoned
The forlorn
The lonely
The souls apart… they are not
alone

Expelled from the divine well spring of eternity
Into the arms of mothers that set us aside… we wait
Alone, in the dark night of the caged-body soul
Till our hand is touched
And the soul is freed

Anonymous said…
I saw your video on http://npirl.blogspot.com/2009/05/attainig-presence-4jetpacks4-and-bryn.html and was wondering who performed the music. Fabulous video. I have some of your work in SL and it is wonderful.
May 16, 2009 at 12:45 PM