“Warning, warning, bogon flux is rising”. If you have heard this then it means you have triggered someones Bogometer. A Bogometer detects bogus statements. Bogon Flux is the measure in the speakers field of bogosity. I think I got that right.
So when I was making this machinima blotto was wandering around the United States in a bit of a grumpy mood and Cutea Benelli was considering making a stuffed prim version of Blotto so that she could continue throwing out ideas and concepts to him while he was away. They sound like a wonderful team. They fit right in there among great collaborators such as Doulglas Story/Desdemona Enfield and Dizzy Banjo/Poid Mahovlich. Speaking of Poid, she pushed Blotto to build this for Second Life's version of Burning Man, Burning Life. Blotto then approached Cutea and we were given Bogon Flux.
Bogon Flux, to me, is the greatest collaboration ever created in second life. It has almost everything. Here is how it works. Or how I think it works anyway. Bogon Flux begins with a main building on the ground. Its like the trunk and roots to the build. From this trunk different sections are rezzed into being, but rezzed randomly. Each time the Bogon Flux builds itself it does so fresh. So over time it slowly builds up ... roots.. trunk .. branch.. twig.. leaf and sometimes it decides it doesn't like a branch so it is ejected in favour of someth 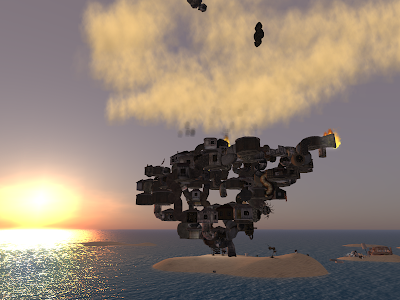 ing else. After building itself for a while it will then release all its parts to float off in order to begin again.
The scripting art within this build is absolutely wonderful. Not just for the workings of the tree itself but the attention to detail. When something is added to the tree there is often smoke.. sometimes flames. Not the same same thing each time. And that is a very important part to this build. Its variation. The viewer doesn't watch the build for 10 min and see all it is going to offer. I was constantly finding new branches that i had not seen before being created. Each quite interesting in its own way and very well crafted. Fantastic textures and builds. I often went inside the build to find little details lovingly crafted to a high level of detail.
I am not a particularly good writer nor machinimator and in reading over what I have written I really dont think I am doing this build justice. So here is the location.
Bogon Flux

and here is a much better machinima by Mescaline Tammas

Cole Marie said…
Miss Benelli and Blotto are 0,o
I remember the first time I saw that I was running around stupidly in awe of everything and running into walls :X
I even got a little floating ozlotis out and started chasing it across burning life