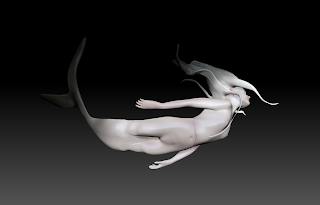 On July 19th at 3pm slt or 6pm Eastern time,
I will open my new exhibit called Mythical creatures on Immersiva.  http://maps.secondlife.com/secondlife/Immersiva/17/110/24
Playing live will be the legendary Skye Galaxy.  Playing before skye at 2:30slt is a new talented performer to Second Life named Semina.

I should preface this with some exciting news which I will elaborate on more later.  But yay there will be a course on the art of Bryn Oh offered at York University and taught by Dr Carolyn Steele.  It will focus on a variety of things but a portion will look at my virtual artwork called "Hand" in the second life form, and then students will use VR to experience Hand in Sansar.  This course is slated to run for five years.  This is a bit surreal for me as I recall being in art school at the Ontario College of Art and Design learning about artists and their styles, concepts and movements.   I imagined being at the edge of a new art movement like Picasso and the Cubists, the Impressionists, Surrealists, Modernists and so on.  So in September students will be learning about a strange artist named Bryn Oh who is an Immersivist.

Anyway there will be more about this in another post sometime.  But thank all of you whose support kept me creating.  What this news means though is that "Hand" will remain on Immersiva for the students to study for a while.  Its possible other works such as the Singularity of Kumiko, Imogen and the pigeons, Annas Many Murders, Lobby Cam, Standby, Virginia Alone and others may appear for different semesters.   What likely will happen is I will create projects like Mythical creatures that can fit into larger narrative works.

So back to mythical creatures.   This was a fun project where I researched 20 legendary, mythical or creatures of folklore from around the world and reimagined them.  Some are well known such as the Dragon or Phoenix, but then there are more obscure ones like the Nariphon or the horrifying Manananngal.   For each I have written a description of them but also in a twist, they can be mixed with each other to create new creatures.  This part really hurt my brain but I figured out how to write a description of the creature that can split along with the model into two halves.   The back half can be mixed with any front half and vice versa.  The text should then also successfully describe the new creature.  My images below hopefully explain better than I am. 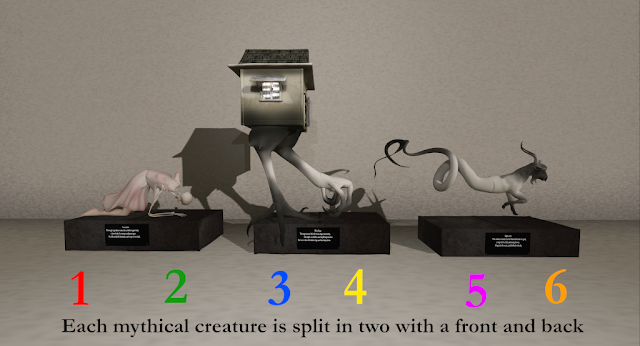 So the red one represents the lower half of La Sayona, the green two is the front portion.  The same goes for the next two models of Baba Yaga and the Capricorn. 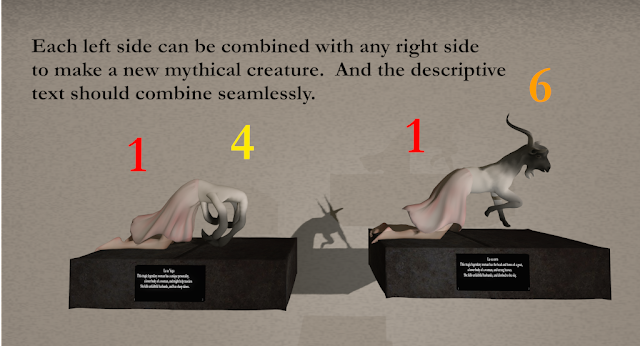 So by playing a gacha game you may get a front or back piece.  They are scripted to pull together and when they do you have a new creature.   In the case above we have mixed La Sayona back part with Baba Yaga front foot and the back of La Sayona with the Capricorn. There are actually 441 possible combinations.

Here is a description of the Medusa.

The medusa was a beautiful woman who was followed and raped by Poseidon in a temple to Athena.  Athena was offended and cursed the medusa so her hair became snakes, her lower body a serpent and her gaze would turn all to stone.  I depicted her as a sad and lonely victim rather than a monster.   Perseus beheaded her with Athena putting the head on her shield.  Beautifully though, the Pegasus was born from her severed neck which I like to think was her spirit.