This is a post to keep a record of a few things going on.  Or went on like a recent talk I did for York University in their course called Art and Artists in digital environments.  This has been somewhat of a tradition doing a talk for York University over the past few years or so.  It is so fun because the students are very keen and interested.  I think I stayed an extra hour answering questions from the students.  It is interesting because the students are younger and more used to virtual spaces now and whats better, they either don't care or are unaware of all that bad media press Second Life took for so long as a result of.. well lazy reporters.  "Hey I have a deadline to do an article on that virtual space called Second Life.. and I need people to click on my article! hmmm I could write about the huge amount of money the virtual space raises for various causes such as Relay for Life or I could write about the groundbreaking art or the fascinating psychology of social groups in virtual worlds.. or maybe I will just write about people having virtual affairs.  Yeah I will get the editor to put up a giant virtual sex title for the article and loads will click it."  You know... it is shocking because the human race.. you know...  have never before tried to incorporate sex into anything.  Especially on the internet.  I mean who could have predicted it!
Anyway, I digress, it is always fun to give a talk and rewarding because I recall being in art school at the Ontario College of Art and Design and learning about various artists.  At that time, in those art history classes, all starry eyed it seemed so far away to achieve anything even remotely like them.  And while I am not suggesting I am anything like those artists I studied, it is fun to think that my art is being studied by students in a course as part of the syllabus.  A South Korean university was on my sim several months ago too I remember.  It just cool the kind of road trips that can happen in a class now and some of their stops take them to our virtual world.
Anyway what else has been happening?.  Linden Lab sent me a message a few weeks ago saying that Vogue magazine wishes to use some images of my artwork for their magazine.  That is the second time Vogue magazine have featured my work in Second Life.  No idea yet when the magazine will come out but will do another post when it does with pics.   Below is one of the images they wish to use.  From An evening at the Ballet.  The other dancers in the background looking at their cell phone rather than at the dancer. 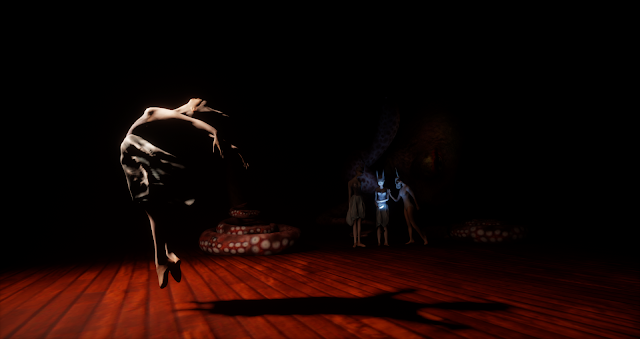 And finally I am working on a new build which will hopefully open in a few weeks.  It was going to open for Halloween but the scripting has been really complex and wont be able to get it done by then.  SL scripting is not really made to do the things in this build so will see if it works.  Progress has been slow but each obstacle has been overcome so I have faith.  Essentially it is a small story about living in a civilized society and the sudden intrusion of our instincts causing us to behave outside those norms.  In this case an overwhelming need to fight for survival, even against those we love.  Then the aftermath where we fight against shame and confusion when our instincts clashed with the civilized norm.  So with this as the premise I have gamefied the psychology of existing within our own minds and the various dark corridors that reside there.  The story is called Jane and Eloise and will make more sense when you see it.  It will be something to do with friends, it will be fun and scary.