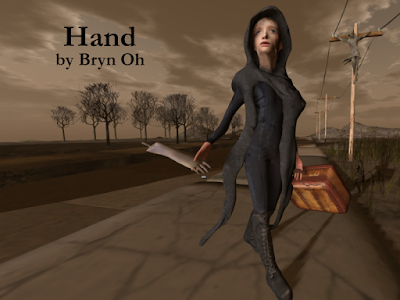 I received this message today and thought I might explain the telephone Jesus that was present in my work entitled "Hand".  I also would like to mention that I am not writing this post out of concern for this message I received, but instead because this person reminded me how much I liked that little part of Hand, and now I feel like revisiting it.  I am actually kind of curious to see if Linden Lab would agree with them and delete the object from the database.  I guess we will see.  I wont go into detail about the entire story as I have done so in blog posts earlier, rather I will just explain that one symbolic figure.
If you look at the picture above in the top right is a stone Jesus sculpture attached to a telephone pole.  The telephone pole's basic shape is that of a cross.  It symbolizes, to me, communication and technology.   The combination symbolizes our societies new Gods.  That of technology, twitters, Facebooks and celebrity.  We worship brands to the extent that reality show hosts can now become presidents due to the surface they project in 30 minute episodes or two line tweets.  We trust and worship the internet and our televisions and now they shape the world.  In many ways I feel like the world has become desensitized to some horrors and there is a lack of empathy in many people.  Unfortunately I don't have a great photo of Telephone Jesus without Flutter and her mannequin hand in the way,  but maybe you can see better if I describe what to look for.  In the top right you can see that Jesus's head tilts down and should you follow his gaze you will discover his eyes rest upon a glowing cell phone on the sidewalk.  If you look at the mannequin hand being held by Flutter it is the blue thing at the tip of the pinky finger and led to by the crack in the sidewalk.  Jesus himself looks down to the discarded cell phone and
upon the screen is a girl taking a "selfie" but it is unclear what the selfie is of.   In this virtual world narrative should you actually click the cell phone you would have been teleported to a new scene.  That scene is the moment where the selfie was taken.  It is of a girl who is taking a "duck lipped" selfie.. a style popularized by, I am fairly certain, kim kardashian.  And with a shocking lack of empathy she is doing it in front of the burning twin towers.  Why do so few artists tackle the twin towers?  This girl is not just taking a duck lipped selfie in front of the towers but has captured the "falling man" which you can see
as a tiny dot to the top right of her head in the middle of the building.
I became obsessed with the falling man while creating this portion of Hand.  He was captured in various footage and never identified.  He chose to jump rather than die from the flames.  In all the footage he falls without struggle, almost gracefully to his own death.  Did he work at the building or was it his first time there delivering a package or perhaps he was attending a meeting?  How did he begin his day and what were his thoughts while he fell?  I know this might sound strange but it was quite emotional for me when I was building him.  I studied what footage I could find for hours and imagined whether there was a mother, wife or daughter who had seen this image and recognized him, and the ensuing torment they would feel.  For loved ones I can imagine that a photo like this creates an endless sorrow in that it is not the empty shell of a body after death nor the moments before a tragedy where they are unaware of what is in their future.. but a moment when they are suspended in terror, a time when you would want to comfort them yet cannot, and they spend eternity frozen in this moment.  All you can do is imagine what they felt, while being helpless to do anything for the one you love.
Sadly this type of selfie is not so unlikely.  There are various trends of posted selfies at accident scenes, at funerals in front of open caskets in front of burning homes and so forth.  Essentially the quest to post shocking things that will garner "likes" where the phone and linked social media overpowers our ability to feel empathy for other human beings.  All this was found by few as you needed to click the phone to actually be teleported to this secret area.   Anyway, person who is disappointed in me, this is what Telephone Jesus symbolized.  My goal as an artist has never been to make cute things but to challenge and create dialogue.
Email Post