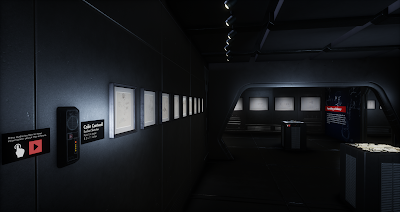 I have been pretty behind in blogging.  I have to do a few post in the future about a show I did for Blue Orange as well as a new exhibit on Immersiva.  So I will do those posts but first I wanted to talk star wars since the new movie comes out on Thursday.  I received an email from Sansar about what seems to be their first public event at a place called Hollywood art museum.  I think they will have various shows related to classic hollywood cinema with this first one being Star Wars.  Now before I get into it, I really do have to say something.  And to be very honest I don't want to slag Sansar as I do hope they succeed, but gah.  So I clicked the email to go to the event and lets just say the event ran 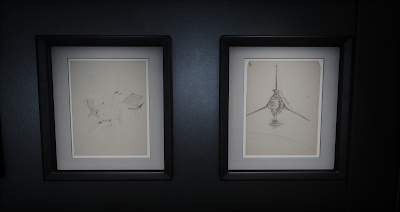 from 7-9 and it is good I didn't need to be on time.  I literally played three different phone games waiting for the scene to load.  It took about 20 minutes.  That is a long time but it is not what killed me, I can survive a wait if it is worth it.   But the problem was that I arrived on a street which resembled a production studio, and I proceeded to walk up to a door to go inside..... it triggered another 20 minute wait to load a new room!  I literally yelled "noooooooooo" when I saw what happened.  I should have looked up to the sky all Hollywood grief style while I was yelling nooooooo but you know.. you think of these things after.  There should be some kind of sign saying "BTW if you walk through this door be 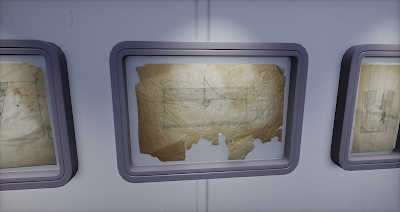 prepared to wait 20 minutes.  Do some laundry."   Anyway, as I said I don't want to get all negative about Sansar,  they are constantly improving and hopefully these things will be resolved over time just like many of SL's early annoying things were.
What I would say though is that I liked the exhibit.  It was professionally done and the original artwork was rare and unique. 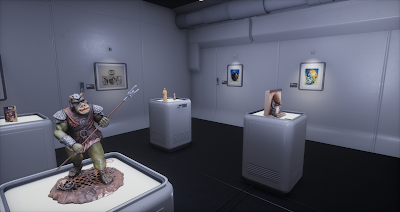 The  3D models were wonderful and while it attempted to pretend to be real life, which I find fairly boring, it still was enjoyable.  Occulus Dash looks pretty cool btw.  I think that is an important step for  VR, but I digress.    If you do decide to visit while using a PC then when you get there press F4 to go into first person view.  I found it a lot easier to see the pictures than from behind the avatar.  There doesn't yet seem to be a really good way to zoom in and inspect things like you can in SL.   If you look below in that picture you will see that I threw Greedos bust on the floor.  I like the idea you can go into a museum and be a jerk.   Anyway, soon I will do a few posts catching up. 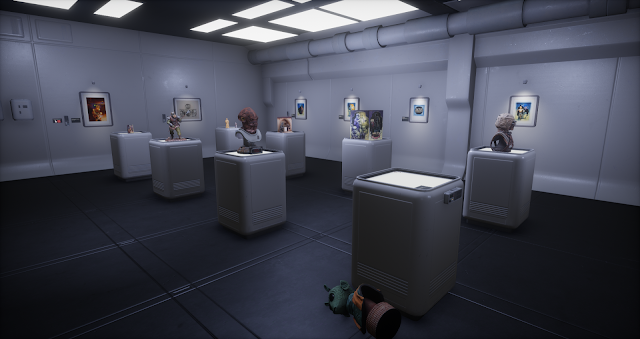