My new artwork "Lady Carmagnolle" is now open to the public.  I am writing a new elaborate story like Hand right now, but the whole process takes several months, so during that time I will be releasing a series of single scene poems.  The poems are ones I have written which are some of the initial ways I formulate or begin to shape an idea for the various characters or concepts I wish to expand on later.  This first character is named Lady Carmagnolle.  A carmagnolle is one of the very 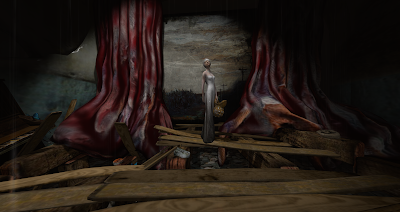 earliest full metal diving suits.  Monstrosities of protection that allowed people to explore the depths, and in her hand she carries the helmet.  In her other hand she holds a rock which she has drawn a face upon.  She imagines the rocks to be injured birds who she cares for.  When it rains the ink washes away leaving a simple stone.  When Lady Carmagnolle looks to find these rocks and instead finds them gone, she wistfully imagines that they have grown back their wings and returned to the sky, finding others to fly with.  In her loneliness this is her most beautiful dream. 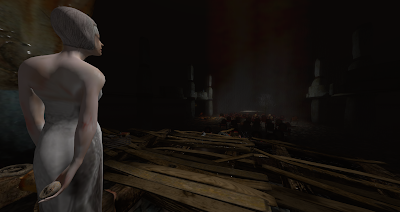 She resides in an decrepit theater in the abandoned Amusement park where the Daughter of Gears and the Rabbicorn eventually find and make their home.  She stands in the ruins of a place that once was the world to her,  and as it slowly collapses around her she doesn't fall into despair but rather performs for her stone friends and smiles in a beautiful melancholy.  Many of my characters live in this area of the world I created,  and I hope to create single scene stories for some of them.  Also I am considering making this character into a bronze sculpture similar to the dancer... if you like that idea let me know.

To visit the artwork in the multi user virtual environment of  Second Life then take this link after installing the viewer.   http://maps.secondlife.com/secondlife/Immersiva/25/103/31
Email Post