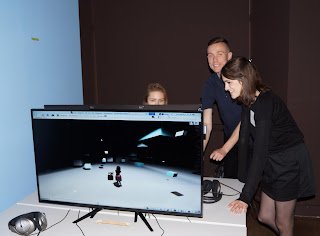 This was a promo machinima for a hybrid art exhibition which exhibited at both the Jüdisches Museum in Berlin and in the virtual environment of Second Life (LEA). The virtual space was created by Bryn Oh and Jo Ellsmere and showed on monitors within the Museum allowing the guests to navigate the 3D space. The Museum installation was the creation of Saskia Boddeke and Peter Greenaway.

I created a retelling of the Biblical story of Abraham and his son Isaac.  Essentially, God wishes to test Abrahams faith by asking him to take his only son Isaac up upon a mountain to sacrifice him to God.  Abraham takes Isaac up the mountain and is prevented from sacrificing Isaac at the last moment by an Angel. 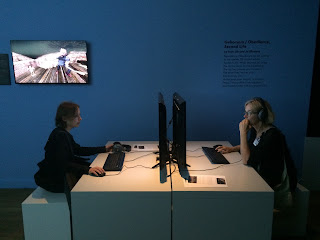 I was not brought up in a religious home so for much of my life I have been an outside observer of those who practice religion.  I am not against any religion, and generally would say I am curious to watch the ceremonies and stories told.  When I was asked to create something for this museum project I decided to retell this story in a modern fashion.  To essentially look at the story as if it happened today and was seen by someone like me, and then perhaps explained to the police. 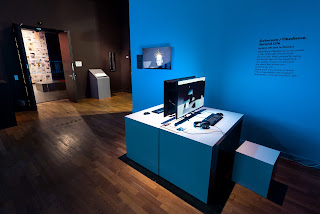 So for example, in my story, Abraham is told by God to sacrifice/murder his son by a voice through the TV set late at night.  He tells Isaac that they are going on an adventure so, excitedly, Isaac packs a backpack with things they need as well as two snickers chocolate bars, one for him and the other for his Dad.  They eventually climb an apartment building stairwell to the roof rather than a mountain and upon the top he forces a gun barrel into his sons mouth.  He pulls the trigger but an Angel places her finger between the hammer of the gun and the bullet.  This mirrors the early pictures of Abraham using his finger, like a pacifier, in the mouth of Isaac as a baby.  One of the strongest and earliest bonds between a father and son. 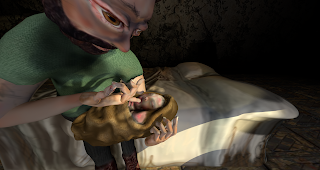 In my version I wondered if Isaac could see the angel or if she were invisible.  I wondered what the moments would be like after God was satisfied with Abrahams obedience towards him and  the gun was prevented to fire.  Would Abraham collapse in relief?  How would Isaac see his Dad knowing that he would have pulled the trigger and killed him?  I wanted to show in the scenes an ugly frantic struggle for survival rather than the gentle scenes usually depicted in religious work. 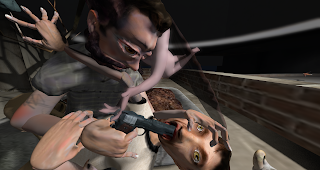 I also created an "after" scene which showed Isaac cowering away from his father in terror peeking through his fingers.  The Angel stands behind Abraham so it becomes unclear whether Isaac is afraid of his Father or the Angel behind him.

In my research for the story I came across some interesting things describing God in his chambers and the various angels around him completely covered in eyes and watching all... which I then converted to camera lenses.  It was an interesting parallel to the cameras watching us all the time in our everyday lives.  There were the kings who, for all eternity, chant about how wonderful God is.  To an outside observer, well, God seems a bit insecure :)  What I also found interesting was that there are a few variations of translations, and they are pretty huge differences.  In some God says "Abraham, take your son, your only son Isaac and sacrifice...." in other translations it is a question "Abraham would you take your son....."  To me this is a huge and interesting difference.  It is either a command or a question.. and if it is a question then perhaps God doesn't want Abraham to blindly be obedient but rather to think.

I was really happy with the conversation and discourse this work created with most visitors.
People generally talked and debated in a very civil way.  It was encouraging.  I did, however, get a fair amount of angry mail too haha.  But that was to be expected. 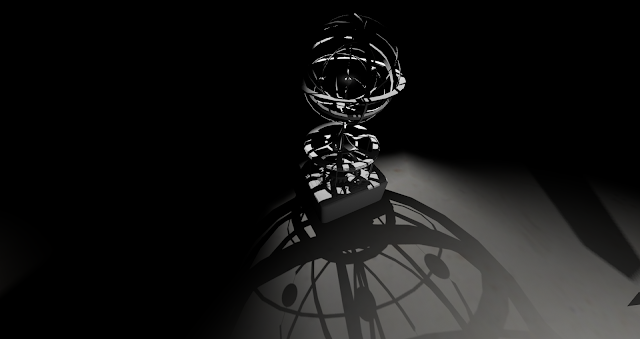