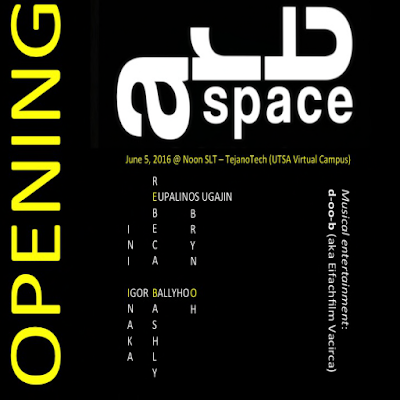 On Sunday June 5th at 12 noon SLT The University of Texas will host their first new art show in, I think, three years.  Constructivist Solo has reinvigorated the space with a gallery setting built by Igor Ballyhoo and will host a show of five artists.  With more shows every three months or so.

And there will be music by d-oo-b

If I recall correctly the very first show they did was in 2009 and was Yoko Ono's Imagine peace tower.  Yoko Ono herself was there and her avatar strangely looked just like her.  I did the next show and it was one called 26 Tines.  Still one of my favorite poems that I wrote.  The machinima is below if you would like to see it.  It's quite dated now but still works I think.