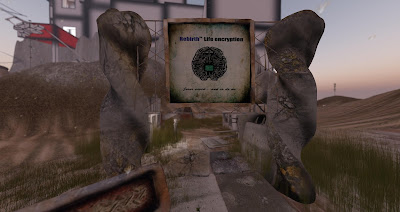 In Imogen and the pigeons, the first part to Singularity of Kumiko, we first come across the derelict remains of a company called Rebirth Life Encryption who touted a slogan that said "Jesus saved... and so do we!"  They had discovered (or rather the technological singularity discovered) how to copy the entire mind of a person to be stored on a computer.  At this time in my story they didn't yet have a way to embody that memory into something biological.  So people were mapping their minds to a computer for that day when they could be reborn again into a new vessel.  Sadly the world was destroyed, humanity removed, all except this one working computer who had survived the centuries.  The last vestage of a human mind which was being watched over and sung to by a Vera Lynnbot which I wont explain now.  Essentially it was her programming to entertain and that was the only surviving piece of humanity.
The Rebirth store provided a service which I am going to talk about in this post.  Just because I find it interesting to imagine.  Some of you may recall that by looking at the only remaining computer that still worked was a name plate for the person's memories that were stored within it.  If you were a good cammer you would have seen the name of Imogen inside there.  Anyway, I am not an expert on this but let me tell you what I have learned and hopefully you will find it interesting too.
In the human brain, not including the spinal cord, skin, eyes, stomach etc there are 80 billion Neurons.  If you are like me then you no longer remember high school biology... nor what you had for breakfast for that matter.  A Neuron is essentially an electrical device which sends signals.  It is made up of the cell body (soma) an Axon and a set of Dendrites.  The tree like things.  Info is gathered by the Dendrites and the output is the Axon.  A synapse is when the Axon (output) and Dendrites  (input) is close to another Neuron and this allows singals to jump from one to the other... which is communication.   Our vascular system transports blood  which acts as the energy source and allows for the creation of electrical signals.  The Neuron adds up these signals until it reaches a total and then then zap! it emits a pulse.  So you could say that all human behaviour is determined by the sensory and motor electrical signals.  The idea of Rebirth Life encryption is that they have found a way to capture these signals or record them.
Now how might it be possible to record all this info?  Seems pretty far fetched and it is.  But most scientists don't doubt that brain mapping will happen.  One method would be to genetically modify ourselves so that our neurons give off a dye that fluoresces when they emit the burst.  With this the Neurons activity can be recorded, every Neuron, by using light microscopy.  Then, rather gruesomely, the brain must then be sliced into very thin strips (which they can already do) and digitized using electron microscopy.
Yet another idea is to genetically modify our Neurons so that they essentially will not just send a pulse but also create a new strand of DNA that acts as a physical recording of what happened just then.  So the brain would store the life of a person within itself, then the process would be about extracting those DNA.  There is another one I read about too but the post is getting kind of long.
So the idea behind the story is that with the emergence of the Technological Singularity, which is the idea of a computer AI advancing exponentially to the extent that it is far past the collective intellect of the human race, this process of memory mapping was invented one day by the AI along with various other daily inventions.  The AI over time, become less and less concerned with helping humans whose lives have pretty much turned into play, and determines that the human race needs to be removed.  That we are somewhat a destructive parasite.  Anyway that is an insight into one elements that inspired me for the story for Imogen and the Pigeons and the Singularity of Kumiko.  I guess next post should be more about the technological singularity and the background of the society that now exists in this world.  Anyway here is the trailer below.  And if you want to see the full machinima for Imogen and the pigeons you can just click the link.