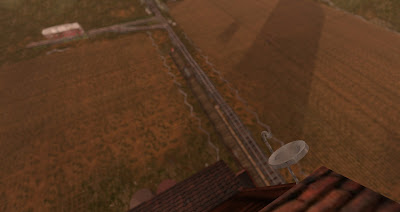 Last night I fell asleep on the couch with the lobby
cam channel on.  I am a sentimental fool, I wanted to
see Fern one last time to say goodbye.  I picked up the
TV remote to turn it off and there she was.  She came in
and opened her mailbox.  She peered inside, found nothing
as usual, then closed the door.  I watched her look down
to her letters on the table and hesitate.  With the
appearance of being defeated, Fern slowly picked up a
letter and I can see on her cheek a tear to match the one
I shed last night.  She lifted the letter and for the first
time I could read the address on the envelope. 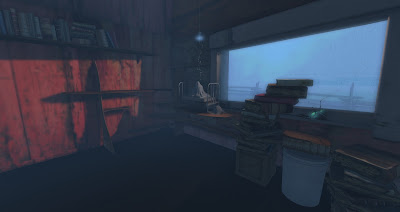 and in big black letters ... MOVED

I watched her open the letter and the mystery that
eluded me for so long became clear.
"Oh dear Fern, you don't have anyone to talk to.  You are so alone and live through the discarded letters of someone who has moved away.  You hold the leftovers of a full life and pretend they are your own. 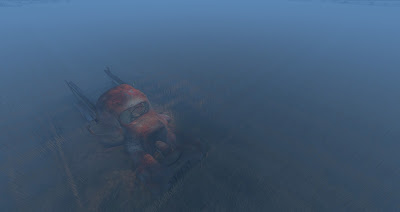 In the August 11th letter the toymaker discovers that each time he has watched Fern stand and read her letters she was instead reading, smiling and living through the correspondence meant for a lady who had moved away from the apartment building yet still received mail.  Despite the teeming city around her Fern was as alone and secluded as the toymaker. 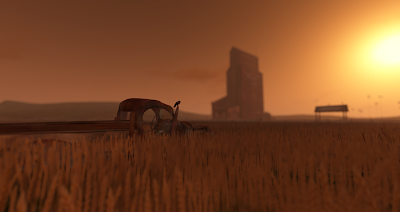 Well Fern is what I call you.

I know this letter is destined to fail, for how can it not?
It is addressed to a lady who has moved away, yet meant
for the girl who secretly reads her mail.  I decided though, 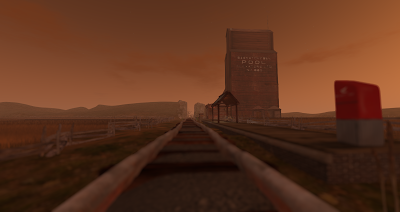 that I would try, for if I don’t then I will always
wonder  to myself what may have been.
What I am about to tell you must surely convince you
that I am crazy, or that you are the recipient of an elaborate joke.   Either way I wouldn't blame you in the least should you throw this letter away never to respond.
Eyes you have never laid upon me, nor have we ever
spoken.  In fact we are 3,000 kilometers apart.

Yet despite this, I think that I am in love with you.


And so ends the story for Lobby Cam.  The toymaker has decided to write to Fern and try to explain everything that has happened.  One side of him feels that he should just stop watching her and try to move on.  That he has imagined a connection to Fern.   Another, winning side, has convinced him that, though perhaps inappropriate, he would try to contact Fern and see what happens.  He knows that she may well be alarmed and never respond and in fact he expects that.  Placing himself in her position he is not sure that he would respond either, but he also knows that if he does not try then he will always wonder what may have happened.

The story ends here but for those who are persistent, then there is more.  For those who have collected all the diary entries and also found five parts along the right side of the hud (with no explanation of their purpose whatsoever) then they can do one final thing.  If, over the course of exploring, they have clicked on the pen and ink, paper, found a stamp and now Ruth's address.  If they have those and have also found the blank envelope in the red toolbox... well they have all the parts to 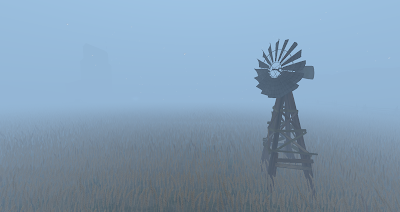 write to Fern.  When all these parts are collected an object called "Letter to Fern" is sent to your inventory.  Wearing the letter gives you a blank page to write a letter to Fern.  After completing the letter and by standing close to the red mailbox you can send it to Fern.  There have been around 40,000 visitors to Lobby Cam and of those just under 1000 have written a letter to Fern.  Each letter is sent to an email address which I go to and I have read each letter and replied, and each reply is unique.  Yes it was crazy of me to do this, Caer told me that the day I told her what I was going to do.  It was a huge amount of work but I felt it was important to allow the person who was exploring the story to move from being an observer to being the main character.  They were able to make an assessment as to how they felt about the Toymaker and then in this twist, they now needed to write a very difficult letter to Fern.  And it was very important to me that each letter was not just replied to with a standard pre made response.  The letter they got back from Fern had to be a response to what she received.  And it also had to be an accurate response.  What do I mean by accurate?  I mean that she would respond not in a fantasy world where you just brush off being told someone was watching you without you knowing on a camera.. but rather as she really might feel.

At the end of the story he says "Please let me explain..." and this is where you continue from.  It is as I said a very difficult letter to write.  How do you not come across as creepy?  I read one from a German fellow not long ago and he said essentially "I have been watching you secretly on a video camera in your lobby, I have been doing this for a long time and I have fallen in love with you.  I want to marry you and spend our life together... I have decided to tell you this is person though so I have taken a train to where you live and once you have finished reading this letter turn to the door and you will see me there"  now for this one I replied but there was no need to as Fern wouldn't have time to reply as he said he was in the lobby with her... but I did anyway and said that she was going to call the police and had a big can of mace with his name on it.  I had to be ruthless haha.  I was more gentle with people whose first language was not English.   I think he felt he had written something romantic but the reality is that it would be extremely disturbing to be in that situation.  So as I said it was a great challenge for the visitor to write something that made Fern want to reply and I will post a few letters to Fern in the next post.
Email Post
Labels: bryn oh contemporary art Immersiva immersive 3d environments interaction lobby cam new media art virtual world art