Last year I did a machinima for an Australian band named BAK.  It was for a song called Dasha Hara and I was pleased with what I came up with.  They liked it too and sometimes people send things in appreciation for a project they are happy with.  Can be a bottle of wine or a nice book etc.  BAK sent me a rather unusual gift of a can of baked beans with their own label on it.  On the back it stated that BAK beans were made using only the finest ingredients:  Orchestral rock sprinkled with a dash of metal and delectable eastern scales.  They sent the machinima to various film festivals such as the Arpa film festival in Hollywood the BIFF festival and the RIFF festival.  It had never occurred to me to send anything to a film festival but it seems they are open to machinima.  Something else it never occurred to me to do was to put the machinima on my youtube site.  So I did that the other day and here is the video if you would like to see it. 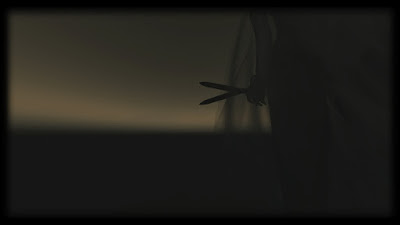 A girl drops her scissors onto the grass when startled during a lightning storm. The scissors land in the soil, one blade piercing it, creating an almost religious symbol or icon which draws forth an Emperor Moth to perch upon it. From there other insects are slowly drawn to the mysterious artifact and soon begin to worship the symbol and its moth. Soon they begin to fight amongst themselves. The girl looks down upon the tiny world at her feet and is dismayed to see what her scissors have caused. A seemingly innocent tool taken and then distorted into something quite different.