"Obedience" an artwork opening at the Jüdisches Museum in Berlin

Opening yesterday is a hybrid art

exhibition showing both at the Jüdisches Museum in Berlin as well as in the virtual environment of Second Life. It will run until September 13th 2015 in both our virtual world on LEA 1 and at the Museum. The virtual space, as seen in the trailer, was created by myself and Jo Ellsmere.  Jo's work is the wonderful bot performances you will find in the God room towards the end.   The immersive space we have created is being shown on monitors within the Museum thus allowing the guests to navigate the 3D space as part of the overall Museum installation which was the creation of Saskia Boddeke and European director Peter Greenaway. 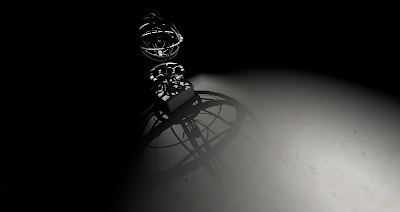 This is a very important exhibition in that it is a high profile use of Second Life as an artistic medium and its mere presence within a Museum of this caliber legitimizes the virtual space as an art medium for some, who before now may not have associated it in this way.  Credit for this should be given to both Saskia and Peter who are staunch supporters and believers in this medium, they could easily have created the work without using the virtual space yet pushed the idea on the Museum directors and have them interested as well.
The story for the exhibition is that of Abraham and Isaak from the Bible.  The Museum space is made up of 15 rooms and reflects on the narrative in a macro viewpoint.  The Second Life portion is a micro viewpoint I created which is a modernized retelling of the story.  My intention was to see how we may interpret the actions if they were slightly altered and presented in a way that is more familiar to the average person, perhaps removing some of the abstraction and distancing we may get from being unable to fully associate with the characters involved.  For example does our perception change if God speaks to Abraham through the flickering images of a TV set late at night?  I wanted to show the relationship, the deep love and bond between a Father and son, then juxtapose that against a command by God for that Father to kill his son as a sacrifice.  God prevents Abraham from killing his son, but what happens once Gods presence has withdrawn after testing Abraham's faith?  How might the moments go when Abraham and Isaak are now alone and words are needed to explain?  I think it is healthy to change the perspective from which we view things and hopefully the exhibit will encourage discourse and debate for those who experience it.  It will of course make some people grumpy as it relates to the touchy subject of Religion, and I have used some artistic license to portray figures in ways that might not be appreciated, such as covering Gods four angels who surround him with camera lenses rather than the endless eyes as described in Revelations.  But it reflects the monitoring we have in our societies, in fact I expect if I walked out my door right now I could very well be recorded on some type of surveillance.  God's angels are described as being covered by eyes and to me that suggests that God sees all and is an acceptable parallel to create.  Anyway you will see.
When I get some images of the Museum location I will do another post and speak in greater detail of the project.  The SLURL is here http://maps.secondlife.com/secondlife/LEA1/39/215/125 and you will need to set up the viewer almost the same as in the Singularity of Kumiko (the directions are at the landing point)  Phototools - No Light and the shadows with projectors.. you will remember.  The number of avatars permitted on the region is limited.
Email Post
Labels: bryn oh contemporary art Gehorsam / Obedience for the Jewish Museum in Berlin immersive environments jo ellsmere Jüdisches Museum peter greenaway saskia boddeke second life virtual art

Apmel said…
What would make this art deserving spending time over for modern people that has since a couple of generations left the ridiculous 2000 year old book religions behind as a cultural phenomenon? I had this discussion with Saskia a long time ago. She claimed our identities are in part connected to those stories, but I explained to her that in my case and many others in my generation our identities are much more affected by Disney than those old books. Since then she calls me Donald :)
May 23, 2015 at 12:50 PM

Bryn Oh said…
I saw you say something like that months ago too Ampel. Your comments are made without actually seeing the work or knowing from what perspective the work takes. It is not a simple retelling of the story but rather something meant to question blind obedience, insecurity and the various other things not normally associated with this story. I personally don't mind whether you go see it or not, but often in order to criticise something effectively you actually have to go see it first. In addition, beyond the subject matter, if you are interested in the medium as a new artform then there are various artistic elements, advancements and techniques used that are worth taking note of.. if on the other hand these things don't interest you either then for sure don't go see it.
May 23, 2015 at 1:53 PM

Apmel said…
Oh, I wasn't criticising the art work. As you said I haven't seen it. It was your telling the story from the bible like it was something that one should know about (life is too short for that silliness) that got me agitated this time :)
May 23, 2015 at 2:20 PM

Bryn Oh said…
Well you see the work is not telling the story from the Bible like it is something we should know about. It is re-imagining the story under a different filter from which we can view it which perhaps changes the clarity. And the idea is to see if that tells a new story or causes us to reexamine the old story.
May 23, 2015 at 3:08 PM

Dividni Shostakovich said…
Alas, Apmel, those who are uninterested in the history of their culture -- let alone others' -- are condemned to stare at their own navels, believing it to be the omphalos of the universe, with nothing of value beyond it.

Unknown said…
Someone need to calm down (and keep reading mickey mouse magazine). It's clearly not a religious thing, but anything related to obedience anyone can imagine. Personally, I prefer to see it as a metaphor for the Greek economical drama: the political obedience which media are telling the Greek Government to show to -mostly- German authorities (under that view it's funny the rl exhibition is in Berlin) and the need of Abraham (Greek prime minister) to give explanations to Isaak (the Greek people) for the heavy (economical) sacrifices to come. Of cource, another person can see it completely differently. That's the beauty of art. Freedom to perspective and interpretation.
May 24, 2015 at 8:35 AM

Unknown said…
This exhibition and the subject (and I have been there, in the virtual part ) is in fact very modern and less religious in first place. One does not need to know about the original text, because it is self explaining it to you.
It questions you, questions who you are.
You personal.

What position do you take,which decisions do you make, what about your own obedience? What are you doing , because you got told to, how much of it would you do, if not told to?

It can be shocking, it can shake you up, it can make you perpetrator, co-perpetrator, victim and all that same time. Or it makes you a neutral observer. But are those neutrals, in fact, not co-perpetrator and/or victims, too?

And the sweet side effect : For those not firm with the 'holy books' - they get to learn about that part.

Apmel said…
It is always best to leave faith out of it. History tells us as much:

Bryn Oh said…
If, when Ebola spread through Africa, faith were left out if it then there would have been very few to take care of the sick and dying. I am sad to say that I would not be brave enough to travel into such a horrifying environment, yet those with faith can and their empathy made the world a better place in this instance. I personally am not religious, but having said that I am able to see that there are positive and negative aspects to religion and faith. Religious extremism is a type of insanity perhaps, but it is not accurate to paint entire religions with a broad brush to the effect that Religion=bad. I don't feel threatened by discussing religion to the extent that the artistic ideas should be censored.
May 25, 2015 at 5:07 PM