An interview with Cutea Benelli and Blotto Epsilon

I remember seeing the Bogon Flux at Burning Life years ago and thinking how wonderful it was, how it really used the unique properties of a virtual space successfully.  Then they created the Petrovsky Flux (essentially an updated version of the Bogon) which is still one of my favorite creations which you can see here http://maps.secondlife.com/secondlife/Spencer%20Art%20Museum/57/36/21
Cutea and Blotto are two playful minds and their personalities, in themselves, perhaps explain how their quirky artworks were ever devised in the first place. The idea for these interviews are for the reader to see who some of my favorite artists are as people, their attitudes, beliefs, interests and hopefully some unexpected revelations.  Hope you enjoy it.
Bryn Oh: Where are you from?  And who are the most renowned artists (not necessarily best) from your country in your opinion?

Cutea Benelli: I’m from Germany, but to be honest I’ve never really looked at where an artist comes from. If you ask specifically for German artists...i like a lot of earlier 20th century things.


If you’re asking for more recent stuff...hm... I suppose Gerhard Richter is among the best-known, internationally. The last show i went to - it’s been a while - was a Sasha Waltz retrospective. It was particularly interesting to me as it seemed to oscillate between installation and performance, with live dancers interacting with and completing the art spaces.

Blotto Epsilon:  from east coast U.S., specifically the state that futurama likes to make fun of. i’m honestly drawing blank on renowned U.S. artists, probably because they’re the ones i mostly ignore...i’m generally oblivious to the nationality of artists i respect.

Bryn Oh:  Often the average person outside SL  is perplexed with virtual worlds in general.  When people unfamiliar with the virtual ask you what you do how do you explain it?

Cutea Benelli: I have never developed a good explanation and always wished i had one. Got one for me, blotto? Bryn? Anyone?

Blotto Epsilon: good question, because it’s difficult to answer. i think the key thing is immersion, but immersion is an intangible experience that doesn’t yield easily to explanation. So i generally stop there; people either get it, or they roll their eyes and try to find someone else to talk to. Another obstacle is that the examples of virtual worlds that most people are familiar with are based on fantasy, where emphasis is on gameplay/roleplay, which many will find irrelevant to their lives (including myself). Immersion must be experienced, so we need ways for virtual spaces to be less insular; the membrane separating virtual from carbon-space should be more porous so that people are encouraged to peer inside. And of course, the impact of immersion is greatest when the experience is shared among other humans in the same space.


Bryn Oh: Who are a few of your favorite artists and why?

Cutea Benelli: With me, that changes very often. I’II go through phases, and i’m not at all sophisticated as an art lover, more a bit of an omnivore. In the past few years, I’ve been photographing for some small modern dance productions. It was interesting  to expose myself to that without prior dance knowledge and to see what looking at dance could do to and with me, and how my brain tried to decode dance as an entirely different level of artistic expression, how dance invaded my emotions. On the “well, that’s easy to get, is it even art” end of the accessibility
spectrum, there are favourite graphic/comic artists such as Tardi, or Carl Barks, people whom i admire for their skills. Generally speaking, I am often drawn towards the courageous, the radical, art that is daring and risks failure. But I’m most charmed by art that doesn’t take itself too seriously. If it’s silly, I’m in. Like, of all the Picasso portraits out there, “les pains de picasso” by Robert Doisneau is the one I like most.

Blotto Epsilon: hmm. Mark Ryden is one artist that gets my attention; his paintings are just bizarre enough, and there’s something about his soft color palette that appeals to me (Cutea will probably make fun of me for showing any interest in colors
other than gray or dirt). And I’d be remiss not to mention the SL artists whose work I respect most: Claudia222 Jewell, Djehan Kidd, Aston Leisen, Eupalinos Ugajin, and of course Bryn Oh - it is easiest to remember the people who have directly influenced me.

Bryn Oh:  Whose artwork do you personally dislike the most and why?
Blotto Epsilon: i generally don’t pay attention to anyone long enough to dislike them, but the douche bag with the ginormous butt plug in Paris got my attention. Doing stuff like that in the name of art rises to the level of dislike. Really, green?

Bryn Oh:  Which of your own works are you most proud of?  Do you feel any failed and if so do you now know why?
Blotto Epsilon: i have only done two, both were so much fun, and the four year run the Petrovsky Flux has had is amazingly gratifying. i’m proud of the collaboration with Cutea that grew throughout the making of the fluxes -- she has become one of my closest friends. i’m sort of disappointed that the petrovsky flux was never really finished (on the other hand i never finish anything, so i’m used to that). We’re also proud of the bond we’ve formed with Steveke Wulluf, our gracious host at Spencer.

Bryn Oh:  Do you have a method when creating? If so how does it often progress?  For example do you sketch or write out ideas first for weeks or do you perhaps just jump directly into the project with little planning and adapt as you go?
Cutea Benelli: When  creating in SL, i don’t really know what i am doing - I’m a very inefficient and
rather spontaneous builder. i sometimes refer to what i do as stream of consciousness-building, but really that’s just a friendly way of saying “it gets messy”. It’s associative and playful and there is a lot of trial and error and spontaneity and plywood leftovers - maybe bricolage is a good word for it?
Blotto Epsilon: i will think about things for a long time, interspersed with seemingly aimless hacking and playing to test ideas; the actual creation part tends to be kind of convulsive, but working with Cutea moderated this a bit, as we are trying to adapt to each other’s approach. Then there’s a long period of dissatisfaction and tweaking, as if allergic to closure, which is why i never finish anything. Eventually, apathy dominates.

Bryn Oh:  What are you currently reading, listening to or looking at to inspire your work?
Cutea Benelli:  I just finished re-reading both “Nine Stories” by J. D. Salinger and “le rouge et le noir” by Stendhal. Technically, the last book i finished is the very cute “a hole is to dig”. Currently I’m reading two non-fiction ones: “Smoke gets in your eyes” by Caitlin Doughty and “Being Mortal” by Atul Gawande. Not sure what this combination says about me. Maybe “this person reads stuff”?

Blotto Epsilon: i’m (slowly) reading “The Information” by James Gleick and “Pikhal, a chemical love story” by the late Alexander Shulgin. These may or may not be for inspiration.

Bryn Oh:  Does your work have an overall theme and if so what might that be?  If not please describe how you tend to pick your topics.

Cutea Benelli: i suppose what i make in sl is most probably impacted by what happens in my RL in
small and in big ways, but there is no theme i am aware of. Some of my more extravagant wearables have been described as political, and maybe they are. I would love to believe that some of my work is indeed satire, but the truth is i just enjoy a good laugh.

Blotto Epsilon: i don’t think i have a theme, unless selfishness counts. i do things that feel fun, stuff that stirs my imagination.
Bryn Oh:  Have you ever had to deal with negative publicity or a disappointing rejection of your artwork?  How do you deal with it?
Blotto Epsilon: when we were making the Bogon Flux at Burning Life back in ‘08, one of the script police told me the script load of our build was *much* too heavy (it was, we could not have coexisted there). i panicked and threw away most of my code and started over. i’m not sure even Cutea knew how close we came to failing to even begin. Apart from that, i’m neurotic enough to be negative and disappointed on my own.

Cutea Benelli: Ha! I seem to remember that you were trying to tell me but i suspect was too far in “Yay! pipes! Shiny! Rusty!” mode to grasp it. In the end, we were there to fail better.

Bryn Oh:  Would you like to take a stab at explaining what defines virtual art?
Blotto Epsilon: um. [makes stabbing gesture with a squirrel]. i read the wikipedia page for virtual art and i still can’t answer this.
Cutea Benelli: hey, let go of Rupert!
Blotto Epsilon: i regret picking up a squirrel

Bryn Oh:  What would you say makes virtual creations unique over other art forms?
Cutea Benelli: immersion is a great factor, and the fact that you basically can ignore gravity (yay!).
apart from that i believe that medium is not as important as content (or maybe i don’t. geesh). What i loved about the original SL in-world building system is that it was so accessible, so easy. “Here’s a wooden cube. now build a world.” In that sense, it was as democratic and inclusive(?) as we once naively thought the Internet would be. 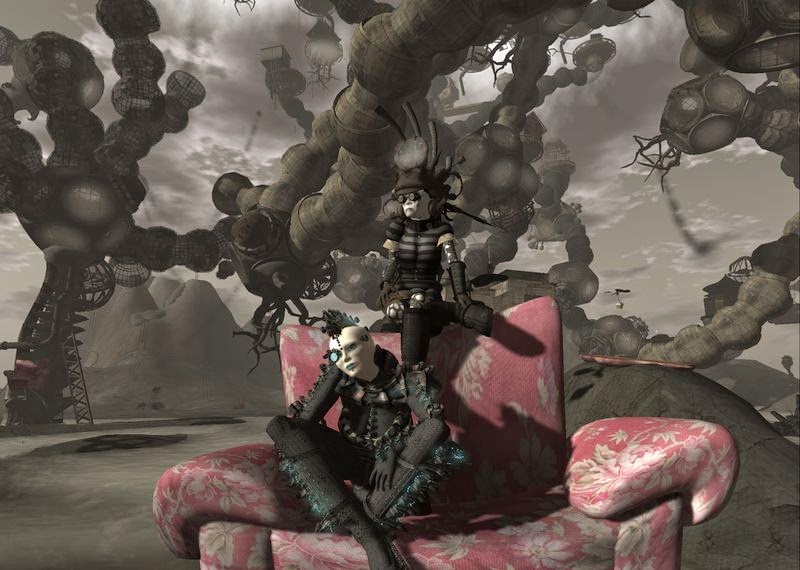 Blotto Epsilon: my favorite aspect is not being limited by physics and other constraints of nature, in particular making things that take on a life of their own. There are few other mediums that allow this kind of meta-creation, where the ultimate result can be surprising even to the creator. Of course, generative art is nothing new, but combining this quality with immersion, allowing one to get inside a living structure, seems relatively unique.

Bryn Oh:  Centuries ago there was no such thing as an "artist" just craftsmen, as time progressed superior technical ability and creativity created the elite "Master" artist whose work stood recognized above all others.  In 1917 Marcel Duchamp submitted a work entitled "Fountain" to the Society of Independent artists.            He stated "... He (the artist) CHOSE it. He took an article of life, placed it so that its useful significance disappeared under the new title and point of view – created a new thought for that object"  He wanted to shift the focus away from technical craft to more of an aesthetic intellectual interpretation.  Some say that because of him almost everything is considered art today.  From an elephant painting with its trunk, a Banksy, a child's drawing to someone vomiting paint onto a canvas.  What is your perspective on this?

Cutea Benelli: i think that sense of humor is the greatest subversive force. Also i think i may be captain obvious.

Blotto Epsilon: my art education ended in 4th grade, so i don’t know the right answer, but i unequivocally prefer the interpretation involving craft. i’ll gladly acknowledge the aesthetic beauty of other stuff (which does not include urinals without plumbing), but i don’t think it adds anything useful to call it art. This is probably an old-fashioned view, but i am old.

Bunny said…
Thanks for doing this series of interviews, Bryn. I find them very interesting.
December 13, 2014 at 10:37 PM