The Dance of Death with Peter Greenaway 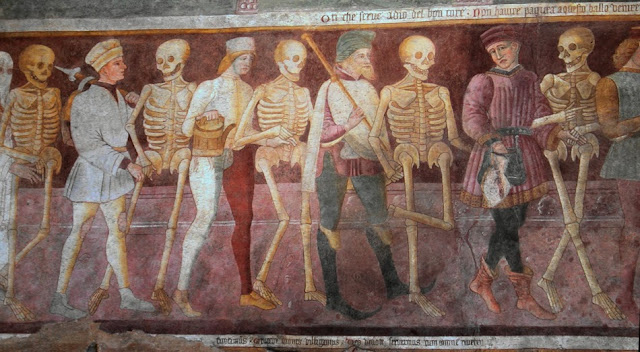 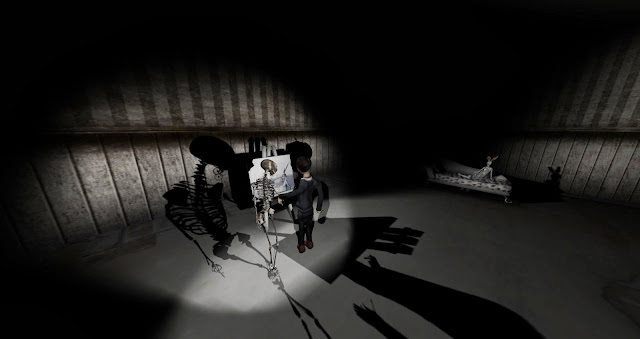 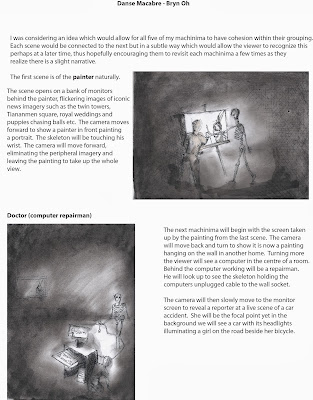 Several months ago I received a request to speak with European director Peter Greenaway on Skype.  My first reaction was alarm then mild nausea as I imagined the many, many scenarios of how I could make a fool of myself in front of someone whom I admire.  Mr Greenaway is known for a variety of movies such as The cook, the thief, his wife & her lover starring Helen Mirren, The Pillow Book with Ewan McGregor, Drowning by Numbers and dozens more.  He is also an author and painter.  I am a.. well .. anonymous cartoon character in a virtual world... nice to meet you Mr Greenaway.
When we spoke on Skype I actually forgot we were talking for a bit as he is an orator of the traditional sense, full of narration and information quite spellbinding. I had to prod myself to at least attempt to make interesting conversation.  I don't recall what I said, which is clearly a defense mechanism instigated by my brain to protect me from embarrassment.  Thank you brain I own you one.  I probably said, during a pause, that I liked orange juice.  I just don't recall. 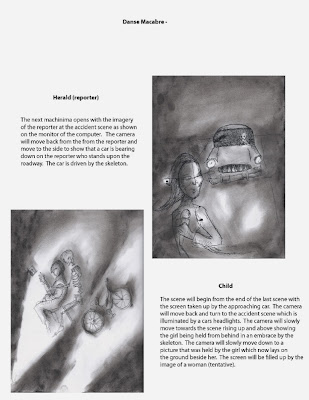 Anyway, Mr Greenaway is fond of my machinima and asked me to create five for an installation work to be shown in Basel Switzerland this weekend.  If you happen to be in that area then do go by and take some photos.  The project is called Danse Macabre or the Dance of Death and it is connected to a church mural that was destroyed during WW2.  The age old concept is, that regardless of our station in life, whether that be King, Whore, Priest or Beggar we are all equal in death.  The ancient depictions of this idea often shows a skeleton gently leading various people off to their demise.  Skeletons today are rather loaded images and have become quite sinister, yet I don't particularly see them that way.   For this artwork I was asked to create five machinima depicting characters from this imagery.  They need not have been connected to one another but I chose to create a narrative linking all five characters together.  I have included my quick sketches which I sent to Peter for approval.  I modernized some of the traditional characters and chose the Painter, Doctor (computer repairman), The Herald (reporter), Child and Mother. 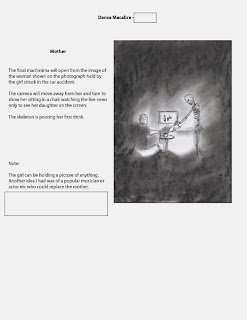 The real life installation takes place in a church graveyard.  As guests walk through the artwork sensors detect them and when they enter a certain radius, a projector plays a machinima onto a gravestone.  An additional challenge within the project was that the film had to fit the gravestones themselves.  So that meant filming in 9:16 rather than widescreen 16:9.  That meant physically turning my monitor on its side so that it was long and tall, then changing its orientation from landscape to horizontal.  Unfortunately YouTube won't show movies in that orientation without adding two black bars on either side or I would have uploaded it for you to see.  I may figure out a way but for now here are a few images taken from the scenes. 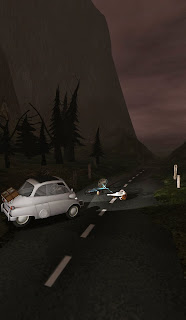 I am going to receive some images from the installation and opening in a few weeks or so and will do a second post talking about the artists involved and then I can include some photos of the event so that it makes more sense.  I was sent the invite and information in a PDF file which sadly prevents me from copying then pasting the information which I can then Google translate.  That Google translation would naturally be completely incorrect but closer than what I am offering which is a screen capture of the pertinent information.

My blog info tells me that I have readers from Switzerland so if you have the opportunity please go and let me know what you think of the installation. 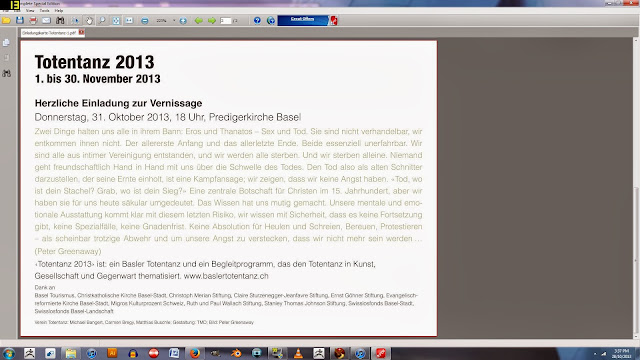 Indigo Mertel said…
Congratulations for your collaboration with Peter Greenaway, Bryn. I am so happy for you.
October 28, 2013 at 6:21 PM

Unknown said…
Congratulations, Bryn! I'm thrilled for you and can't wait to see more about this project.
October 28, 2013 at 8:22 PM

Glyph Graves said…
*shrugs ..Im happy enjoying the way you realised the concept. The installation can wait for my next holiday.
October 29, 2013 at 3:53 AM

Natsuki Morigi said…
Congratulations Bryn!
I hope we can see more of this exciting project.
October 29, 2013 at 6:21 PM

Solkide Auer said…
I'm very happy for your expo in Basel as this town is one of most important center of contemporary and modern art in Europe. I think you know this: https://www.artbasel.com/en/Basel and then visitors are more expert to appreciate this kind of art. Good luck Bryn.
October 30, 2013 at 7:08 AM

Unknown said…
Best wishes and congratulations for the flight of virtual art into amazing places with amazing artists. Fly! Fly!
October 30, 2013 at 12:18 PM

My said…
Congratulations, Bryn. Peter Greenaway is a real genius, so for me this is the most wonderful recognition a visual artist could get. I hope we will see more of this woek soon!
October 30, 2013 at 2:21 PM