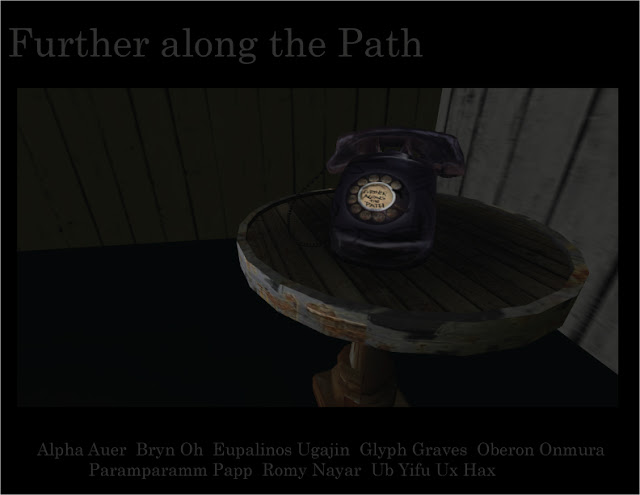 A while ago a wonderful group of artists came together to create an exquisite corpse build called
"The Path".  You can see the machinima for it below.  The artists involved are some of the top virtual world artists and the challenge was to come together and combine their variety of skills to make a whole.  It was a wonderful experience for all of us.

This Friday the 18th at 1pm SLT will open "Further along the Path" which is a new exquisite corpse build featuring more of the best.

Further along the Path is an immersive project based around the
exquisite corpse concept sometimes used by the Surrealists.  Essentially, each artist adds to a composition in sequence.  Eight artists were invited to stand upon one of eight different
coloured boxes I had set up.  Once all had chosen a box to stand on, a chart was rezzed which listed the order of colours which would dictate the order by which the artists would create a scene
for the narrative.
So for example, if red were first on the chart then the artist standing on the red cube would begin the narrative.  If blue were next then the artist on the blue cube would continue the narrative
after seeing the dialogue written by the artist on the red cube who began the story.  The artist who goes first composes the initial start to a narrative.  They then pass on this segment to the artist next on the list.  That artist would write up a continuation of the narrative and pass it on to the third artist.  This would continue until reaching the eighth and final artist.  Below is the random order
of artists by scene.

Below is the SLURL for friday.