BOSL - state of the arts. 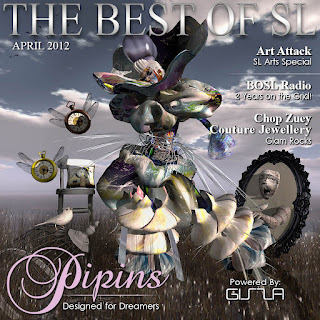 There was a new issue of Best of Second Life magazine published yesterday.   Persia Bravin interviewed me in the publication on how I see the current health of the Second Life art community along with a few other topics.  Also there are some articles with artists Betty Turead, Sasun Steinbeck and Misprint Thursday which I enjoyed as well.

It was with a bit of sadness that I read the introduction as it referenced Persia's first contact with the arts in SL as coming from Caerleon island.  The first space I was ever given in SL was by Georg Jannick, the founder of Caerleon island artist collective and Professor at The University of Massachusetts.  There were only six of us to start and I think they were Georg, myself, four Yip, feathers boa, Sunseeker Miklos, Kueperpunk and Nonnatus Korhonnen.  Four Yip was always one of my favorite artists in SL and Nonnatus created some really brilliant AI work too.  Those founding members might be wrong but it was something like that.  Pixels Sideways, Glyph Graves, Misprint Thursday, Sowa Mai, Luce Laval, Lollito Larkham, Artistide Despres, Sabrinaa Nightfire and Adam Ramona came soon after.    Gah my memory is terrible I probably got that all wrong.   Even Saveme Oh was a member early on... her arrival was like the Trojan Horse, but with a big grumpy Troll inside rather than soldiers.  Anyway, it is a bit sad to read because Caerleon has died a slow death since education discounts were discontinued by LL.  It had grown from a single sim with six artists to four regions and thirty artists.  It was thriving yet today has one region left and it is slated to close unless Georg changes his mind.   One thing that didn't make the interview due to space limitations was this response...

It was a very short sighted and perplexing decision by Linden Lab to remove educational discounts.  Universities help to bring legitimacy to not only virtual art but also to Second Life as well.  The discounts were essentially paying for good publicity by having articles and thesis written about topics beyond those some lazy reporters love to write about such as sex and adultery in SL.  A first life reporter is generally given a deadline to write an article and they have no time nor interest to become embedded in a virtual world to better understand it, as a result they grasp onto the quickest, simplest story that will captivate the reader which tends to be sex related.  Universities have been embedded for ages in this medium and they recognize and write about its importance on many different levels.  Losing universities is a blow to everyone, but especially to the credibility of Second Life as a serious place to work.

After all the first virtual world (called a MUD or multi user dungeon)  was created in 1978 on a mainframe at Essex University.  On a side note what is kind of interesting is that the MUD was written in MACRO-10 code which eventually led it to become unwieldy as it became more complex.  It was then rewritten in BCPL the forerunner of C.  From what I understand Second Life mirrors that to a degree with LSL scripting being a bit unwieldy.
There still are active Universities with the University of Western Australia (Jayjay Zinfanwe) being one shining example or the University of Kansas who hosts one of my favorite builds ever created in SL called the Petrovsky Flux by Blotto Epsilon and Cutea Benelli.  The UWA is here now and strong but so was Caerleon at one point.  Paying tier at its current rate can't last but I don't expect LL will change their policy until they have introduced a separate money making enterprise unrelated to SL.  The problem is that you want to catch people before they leave as I would imagine it to be much more difficult to bring back Universities once they have set up elsewhere, even with steep tier cuts.

R. said…
"The problem is that you want to catch people before they leave as I would imagine it to be much more difficult to bring back Universities once they have set up elsewhere, even with steep tier cuts."

Jegatheva said…
wow... the petrovsky flux. I see now that it was part of Tutsy Navarathna's award winning machinima for the Journey challenge (MachinimUWA III)

Anonymous said…
Try as she might, Save Me Oh can not even be the shit that nourishes the grass the sheep eats. My apologies for poor blog behavior but..delete as needed.