First of all I would like to thank everyone for the incredible support shown for the crowd funder to keep Immersiva online.  When I was in high school I was convinced to be in a fund raiser where I was auctioned off on a stage in front of the whole school.  The idea was you would be someones slave for a week carrying their books and walking them home or whatever they wanted.  Fortunately and unfortunately I worked out in advance with a friend to buy me if nobody else bid.  I said I would pay half.  It was a good idea I did that because it was uncomfortably silent when I came on the stage.  Someone did bid for me and my damn friend kept outbidding them with my money!
When someone suggested I try a crowd funder I kept thinking about being on that silent stage in front of a few thousand students.  What if nobody donated?  It makes you a bit anxious.  I set up the crowd funder to last 60 days which I figured should be enough time to get at least some of the money and so I was shocked and touched when the total was reached in one day.  So I am happy to say that Immersiva will be back.. in fact it is already back but will be used for a date perk by one of the donators.  The crowd funder has to run the full duration so I will not be sent the donations until it closes but it is safe to say that Immersiva will be around for a while yet.  On the 1st it will open with Standby the third and final part of the Rabbicorn story.  That will be up a month or two while I film. 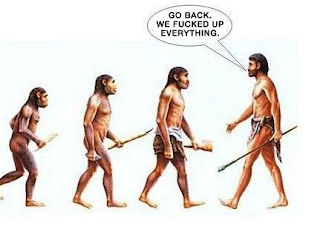 I did an analogy in a post a few weeks ago where I suggested the roots of the Linden tree were made up of old time Lindens who knew the community, and as each was let go by the Lab those roots were severed thus weakening the tree.  I have come to realize after this experience that those roots are actually made up of the residents of this virtual world and the majority of Lindens really only ever were the initial seed that took root.

I wouldn't say Linden Labs screwed up everything as the image above might suggest, in fact I think they have done many great things but the picture is funny and I wanted to use it.   I do however think something very important needs to be publicly stated by them.   They need to tell us that should Second Life ever come to an end they will allow the users to go to another grid with all their possessions.  That they will allow us to download an OAR file to our computer with all our stuff on it or all that is legally ours to take.  As a creator this experience has shown me that my work can easily cease to exist so what needs to be done is to have it exist simultaneously on a variety of grids so it wont be lost.  On other grids users are able to have control of their own work and can move it from grid to grid or throughout the hypergrid.  Linden Labs should consider making Second Life the entertainment and economy grid with other grids hosting the community where land is around $20 a month compared to $295 and people can spend freely.  Linden Labs can create transfer fees or charge for OAR files to try to make up for what they would lose in land rental but I really don't see the current pricing system lasting.  I am not going to pretend to know the finances of LL and this is all merely speculation but it seems to me that something needs to be done.  A new creative approach that may hurt in the short term but will ensure long term success.
Anyway, thank you everyone for the support it really means more to me than I can properly express.
Email Post

Von Johin said…
Your points about mobility between grids, I can only say, from your lips to God's ears. I have performed in multiple grids as Von Johin, but its always of course with a completely different look, a different guitar as opposed to the multi-hundred prim genuinely made models that are copies to the smallest detail of my real world guitars. Having setup my own SIM on a server locally and messed about with Oar files, etc I know that things really can be portable, but as long as LL gets my $295 a month they will never be so progressive as to allow me portability. I wish they would begin to charge connection fees for outside sims to connect to the grid and allow me to port my belongings, my look, everything to other virtual worlds so I could expand my base of live music performances, but I am not so certain this day will ever come. Meanwhile, we really enjoyed being able to film mechinima of one of your stunning builds for my Dylan cover recording of Visions of Johanna. Your build, used with this haunting, slow rendition, made for the perfect video for the DeadCoversProject on YouTube.

Anonymous said…
So good topic really i like any post talking about Ancient Egypt but i want to say thing to u Ancient Egypt not that only ... you can see in Ancient Egypt Ancient Egyptian Gods and more , you shall search in Google and Wikipedia about that .... thanks a gain ,,,
May 4, 2012 at 6:18 PM