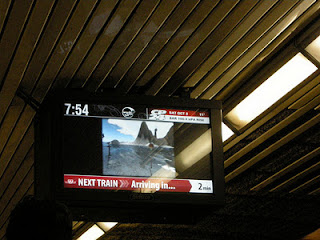 I was reminiscing about Immersiva and I was not sure if I posted this before, but the photo above was a project I did for Nuit Blanche a few years ago.  Immersiva was played on hundreds of video screens across the entire subway system in Toronto over one night for an art event.  It was quite surreal to see it up there with all the people bustling around.  Anyway, hopefully everything will work out but thought I should let people know who have been trying to get to Immersiva for Standby.
Email Post

I am an avatar. said…
Dear Bryn,

I wish you peace of mind and a quick resolution to this.

how about English said…
This is truly a sad day!! What does Second Life say about this?

Hope to see things back to normal soon!!

Bryn Oh said…
Thank you Theoretical and Kana. I have sent a message to Viale Linden and hope to hear from him soon.
December 12, 2011 at 9:51 PM

I am truly sorry.
I hope the problem will be solved quickly.

Merlino Mayo said…
I hope that everything will be resolved as soon as possible. Your art work is too important for us all, for the development of virtual art and the community of artists. Best wishes and a big hug. Merlino
December 13, 2011 at 9:13 AM

Indigo Mertel said…
This is really sad news and I wish to join all fellow Second Lifers, hoping that a quick and happy resolution will be found.

I am also troubled by your comment, Bryn, where you say: "When I do and know what my future holds and where, I will post it here." I really hope you are not considering leaving Second Life. It would be a huge loss for all of us.

Nyx said…
Stunned to hear of this in-world and now confirmed in reading this. Truly impressed by how honestly and tactfully you are handling what must be a stressful situation. Hoping to find continued delight in your work.
December 13, 2011 at 6:57 PM

Bryn Oh said…
Thanks everyone for the support. I am still fairly in the dark as to what might happen. Indigo I can't afford to pay for a sim in SL, yet I have my grant work to do so that means I may have to move over to Open Sim. I know it is supposed to be affordable but not sure if it is stable enough.
December 14, 2011 at 9:55 AM

Indigo Mertel said…
I really hope you won't have to leave SL, Bryn.

I really wish I could help. You'd be welcome to be our guest in the East River Community but I am afraid we would not have enough resources to offer on the scale you usually need for your work. But, should you ever need a temporary solution you'd be more than welcome to be our guest. I have a large piece of land, 3/4 of a sim, which could be used as a temporary solution.

I hope this matter is resolved soon. Either way, I am pretty sure you'll receive some offers and I am confident a solution can be found.
December 14, 2011 at 7:52 PM

Bryn Oh said…
Thank you Indigo that is a very kind of you. I wouldn't impose, but it is rewarding to know there are those like you who would make such a generous offer. I still have my fingers crossed for SLanta Claus to come fix everything.
December 15, 2011 at 11:29 AM

Semaj said…
...feel like I've lost an imagination limb in my brain but am still haunted by the phantom feelings of despair and love it possessed. Long live Immersiva and her goddess creator, may her world rise again like a dark crow from the charred mist of her mind

Anonymous said…
Dear sis, I can't either afford a sim and I hope the Linden will finally recognise the undeniable value of the OH family by creating an art reservation for our family where, you, me, Selavy, Boheme, Bibbe and Magicflute can work. Undisturbed by the greedy claws of the Linden vultures who pretend to be artlovers.
December 16, 2011 at 9:20 AM

DeNovo Broome said…
EEK! Oh, this sucks and I so wish I had stock in LL, so I had a few useful phone numbers.

Meanwhile... if you wish to experiment with the idea of an distributed work - one scattered all OVER SL - I'd be willing to free up some prims.
December 18, 2011 at 3:36 AM

Jami Mills said…
Bryn...I, too, was disheartened to hear of the demise of Immersiva. A solution exists because one must exist. Don't lose heart. Hopefully, you will look back and understand it to be the best thing that could ever have happened.
December 18, 2011 at 2:07 PM

Opensim Zealot said…
@Brynn "I still have my fingers crossed for SLanta Claus to come fix everything."

Opensim Zealot said…
@Brynn (Re Opensim)"I know it is supposed to be affordable but not sure if it is stable enough."

And SecondLife is Stable?

FYI - unlike secondlife, in Opensim you can back up your work(an entire sim) to your local harddrive, unlike SL which bind it to their platform.

You could even unpack it to one of the many hosted grids.

You don't have to sell out to the highest donator Brynn, bring your talents to Opensim and actually give to people who will appreciate your talented work.

Cole Marie said…
Not really sure why Bryn needs to respond to you Dave, looked you up and you call yourself Opensim Zealot a self proclaimed defender of OpenSim or spokesperson. It is kind of embarrassing to have to explain this but the Slanta Clause comment was a joke. You see Santa Clause, Kris Kringle, Saint Nickolas or Father Christmas are Folklore. Not actual people Bryn can "beg" to as you put it. But whatever. Have fun with your assumptions. Which one should not operate on. Btw.
December 19, 2011 at 12:39 PM

Anonymous said…
LL's land policy is simply sick. It is a business model that keeps clients out and leads to the death of the best, because talented people get tired of paying in order to bring quality content to SL. Regarding OpenSim: look at other Open projects such as OpenSSL and OpenBSD; they are simply the best in the world in their own kind. They are licensed under BSD, one of the most permissive of the free software licenses. BSD computer folks are not only the most talented; they are the ones with a big heart.
December 20, 2011 at 5:58 AM

Forget him. Bryn, it would be a sad thing for Second Life to lose you. You are a jewel in the Virtual Art world, and housed in a costly setting that puts more value on itself than on the gems it displays.
December 21, 2011 at 1:45 AM

Corcosman said…
If you have considered setting up your own OpenSim grid on your own machine, contact Fleep Tuque at fleepgrid.net She's done the same herself, been in SL since beta days, still maintains Chilbo in SL and is in RL education, so she's oriented to helping people to learn.

The big advantage, of course, is that you have control of your work and you can export it to other platforms.
January 3, 2012 at 9:56 AM

Anonymous said…
If you haveDiablo 3 items regarded as putting together your own personal OpenSim grid yourself machine, contact Fleep Tuque on fleepgrid.online She will be carried out exactly the same their self, visited SL considering that beta days and nights, even now retains Chilbo throughout SL and it's in RL instruction, consequently she hasCheapest wow gold focused to be able to supporting visitors to learn.
August 4, 2012 at 1:25 AM