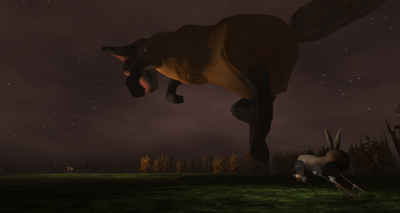 In the recent updates to Firestorm and Viewer 2 there has been an adjustment to a default settings.  Changing a default setting is likely or should be well considered before implementing as it defines how the new user will interact with Second Life for many months before they even contemplate customizing their own viewer.   They will just accept what they start with and assume that's the extent of the experience.  So the change I am talking about is called LOD.  LOD is level of detail and it applies to an objects mesh.  The higher the LOD the more crisp the sculpt or prim from a distance.  A low LOD setting will render things as blobs until you get very close.  My LOD setting is set to 4 which means everything generally is crisp from even great distances.  In the image you can see a sculpt fox which keeps its shape nicely from the distance I took this photo.  Should the LOD have been set too low then the fox would have blobified itself.  It's not a nice effect and many builders are concerned at the moment because the default setting for LOD has decreased to 1 or the lowest setting.  This will help the low end machines perform better in second life so I am assuming that is the intention in decreasing it.
I know there is alot of excitement about the coming implementation of mesh and I look forward to making more detailed works in SL too.  However it is very important that we understand mesh will not nor should not push out the use of prims nor sculpts.  The fox you see here is a total of 7 prims.  If it were done in mesh it would likely rise to around 500 prims because currently the size of your work as a mesh varies the amount of prims they will cost.  The benefit in making this fox worth only 7 prims while being on megaprims is a huge benefit over mesh at the moment.  So lets keep that in our arsenal of tools when building.  But a sculpts overall value will diminish greatly if they end up looking like blobs to the vast majority of users.   Because you buy a large nail doesn't mean you should throw away all your little nails and screws.
Another thing to consider about sculpts is that a huge portion of the economy from fashion to furniture is now based off of sculpts.  People will not like the idea of replacing items because things suddenly start looking less appealing.  As well many of the artworks in Second Life will suffer the same problem.
On phoenix viewer, in the bottom right, is a scalable tool to rise or lower LOD.  It's not hard to find and easy to change.  On viewer 2 and Firestorm I have yet to find where to adjust the LOD setting and I am an experienced user.  A new user will never find the LOD setting before they determine whether they wish to stay or not.  I spoke to Jessica Lyon (Phoenix/Firestorm viewers) the other day about this and they will be increasing LOD to 2 or 2.5 for the next update, but a similar attempt to speak to Torley Linden has not been successful.  Thing is I have no idea who to contact about this at Linden Lab so that is why I am writing this post.  Also while I am at it please add the multitude of windlights to Viewer 2 and revert the way we adjust windlights back to how they originally were.  Right now I can't edit any default windlights even slightly which is a huge problem for machinimatographers.  Sometimes you just need to lighten a windlight or make a minor change which takes seconds but unfortunately now you must create a whole new windlight.
Email Post

Bryn Oh said…
Thx Emarald yes same for Firestorm too. But that is what I am talking about. Have to open advanced menu which is Ctrl-Alt-D then from there go down to show debug settings or type Ctrl+Alt+Shift+S which opens a dialogue box which you then type in rendervolumelodfactor and then set the level. Just seems too difficult to find, not that a new person would be looking.
August 16, 2011 at 3:09 PM

Anonymous said…
Firestorm (at least the build I have) has it accessible from the bottom menu. There is a Phoenix icon button. Clicking on that brings up a menu of common settings, "LOD Factor" is one of them and can be set between 0 and 4.
August 16, 2011 at 3:22 PM

Scarp Godenot said…
Durian Linden might be the person to contact, as he is the new Linden in charge of Art content as far as I understand.....
August 16, 2011 at 11:47 PM

Opensource Obscure said…
suboptimal workaround for when you need to change current windlight setting but you don't need to save it: change sky settings, then minimize floater instead of closing it.

This issue and other related ones are currently tracked in https://jira.secondlife.com/browse/STORM-1525 ("new environment settings design makes taking photographs very very painful") and I'm trying to move their fixing forward (ie, helping so that they get fixed)
August 18, 2011 at 10:48 AM

Bryn Oh said…
Thx Loraan didn't notice that. So it appears to be just Viewer 2 that needs a quick access to LOD. Thx also Scarp. Thank you as well Opensource I will attempt to bring a few votes to that Jira if I can. BTW you are still in the top ten for the seasons fastest runners in the Avatar Games Mr Obscure.
August 19, 2011 at 11:50 AM

Runescape Money said…
Use the cinnamon on the Brule, and then rub the token to make a fairy dragon seem RS Gold. Ask him to flame your Brule, he will breathe on it and it will be complete. (Note you'll take a great deal of harm if not wearing items like any-dragon shields or ice gloves.)This part may be the most harmful part of all. You have to fight monsters RS Gold, your prayers will not function and should you die, you loose your three most rarest items that you are carrying.
January 24, 2012 at 2:49 AM

Anonymous said…
suboptimalDiablo 3 items workaround when ever you must alter present windlight setting nevertheless, you don't need to save that: adjust skies options, then limit floater as opposed to shuttingDiablo 3 Gold kaufen down the item.
August 6, 2012 at 2:28 AM