Taralyn Gravois contacted me a few months ago asking if I wanted to exhibit my preliminary sketches for the builds I make in Second Life. I was intrigued and began searching my sketchbooks for all my little brainstorming doodles. I have boatloads of sketches ranging from 20 second drawings to finished paintings or encaustic sculpture.


You can see a few versions of the Daughter of Gears here, and I think there are four of five more at the exhibit.
Here above is a wax and wire music box Mayfly which inspired me to make the Mayfly in Second Life.  You can see them in the video below.  The mayfly really does have a poetic life.  They live as larvae in the mud then for one day sprout wings.  At the end of that day they die.  Often they are reborn without mouths as they just are not needed when you have just hours to live.  Its almost tragic to give them the ability to fly for such a short time.


Below is Zinger the Rocket Dog.  This advert was for Condos in Heaven but was also meant to be an introduction to a character for a later story which I have not made yet.  It is the story of Mr Lightbulb which you will only know if you came to Immersiva a year ago or so.  My very first machinima (which is terrible) was of Mr Lightbulb.  If you really want to see my first machinima it is here its brutal though, I didn't even take off the screen border for it.  Or my huds and things. 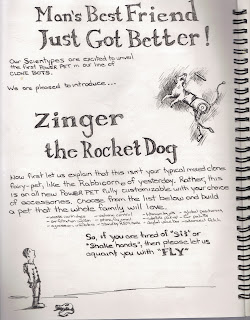 For Condos in Heaven I created a large back story for the build in conceptual adverts that described the state of the society in that alternate world.  Essentially the build is about the human race accidentally finding Heaven after sending out a satellite probe.  It touched on ideas about our values and questioned what that line was which we wouldn't cross in our search for resources.  In my story we make war on Heaven and win.  During the war we use propaganda to convince the population that really its not wrong what we are doing.  We cut off angel wings for the wealthy to wear as accessories.  The height of fashion is to wear a Halo.  And of course the greatest achievement in life is to have a Condo in Heaven.  Also in the story Satan is caught harbouring God.  It's an unlikely alliance but necessary. 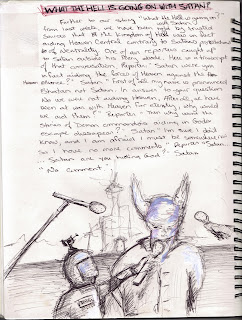 You can click on any of the images if you want to read the text.  Also I apologize for the shoddy look of the post but blogger sometimes changes things.  I can set things up just so, and then when I publish old drunken Blogger plops things down wherever it wishes.


BambiTwice Nitely was kind enough to give Taralyn land to create her first gallery.  An interesting part to the show was that Tornado gallery actually has a Tornado which comes during the show to tear everything to bits.  It was fun and unique to have a Tornado suddenly arrive during the opening to suck up all the avatars. 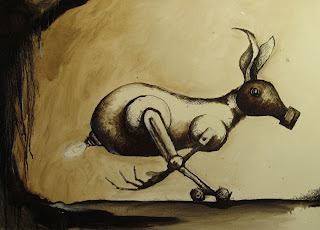 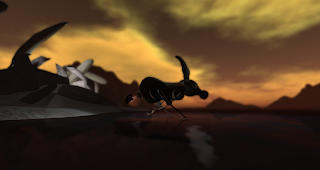 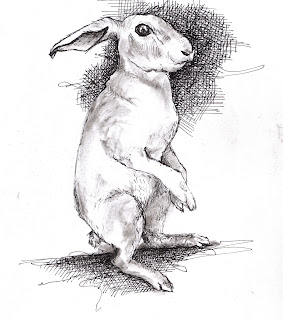 Anonymous said…
So wonderful to see your sketches, Bryn. In a way they are very different from your work in SL.

They truly blew me away :)

Bryn Oh said…
Thanks Isa. Yes they are quite different from my SL work, and my from my finished paintings even more so. I think the main connection is an underlying mood. My greatest interest is really about having a mood i need to express and manipulating either paint, wire or prims to somehow let another person feel my emotion whether from across the street or the world. It's an amazingly fun challenge.
February 23, 2011 at 2:16 PM

Anonymous said…
I really enjoyed getting to see behind the scenes a bit, so to speak. It is interesting to see the iterations artists go through as they refine an idea. To often, we just see the "finished" piece. Thank you for taking the time to put all that together.

Oh, and the tornado was... interesting. I wonder if they've considered doing something like that at SFMoMA.
February 24, 2011 at 1:32 AM