Chantal Harvey is well known for her machinima skill as well as her ability to organize large events such as the MMIF which last year was shown in a variety of locations to great success in both SL and in Amsterdam on a movie theater screen.  Grace is a beloved songstress who was also a mastermind behind Mummersion which was a unique musical performance whereby the audience was transported through different scenes during her performance.  Link here to see that.  Salome Strangelove wrote the lyrics to the song.

Chantal filmed the machinima in Standby and I think she did a wonderful job. 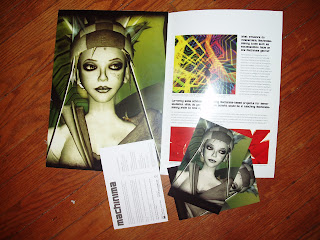 I was speaking to someone the other day and we were lamenting the problem with SL being a "closed garden".  I have heard this term in the past and adopted it along with everyone else.  A closed garden, for those of you outside SL and unfamiliar with the term, suggests that due to the problem with people having to download the software to enter second life, combined with work created in SL being difficult to showcase to the "outside" world, then we tend to not get attention for all the great stuff we are achieving.
This really is a new frontier in art and damn if only we could show people what we are doing.  But then I started thinking back to 2010 as we approach 2011.  I think the garden walls are coming down slowly. 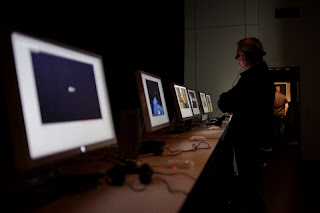 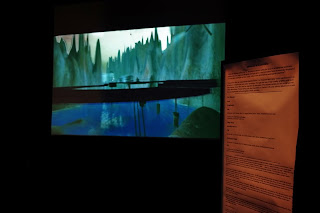 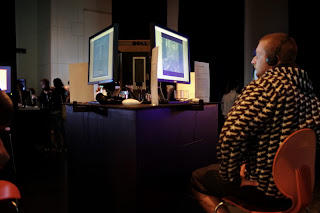 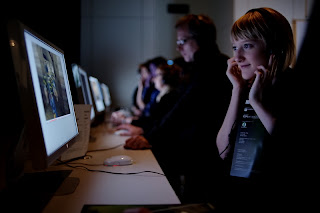 For example Chantal, as I mentioned above, had a movie theater outside sl showing work we created here.  Tons of people and lots of attention.  Last year Caerleon art collective had a show in Boston at a gallery where myself and others were able to showcase our work.  There was the World Expo in Shanghai organized by the Spanish curator Cristina García-Lasuén.  That event at the Spanish pavilion highlighted our work to literally millions of guests.  I had machinima in Nuit Blanche as well as renowned director Peter Greenaway showcased our work in Warsaw, Poland earlier this month  and it appears Big Bang may become a traveling art show.  My work was shown in a variety of RL publications and we were covered by ART 21.  Oh and there was a machinima exhibit for Queensland University of Technology (images above) where Evo Szuyuan showed her machinima of 4Jetpacks4 a build I created a few years ago with Glyph Graves and Nonnatus Korhonnen.  And yes that is me on the cover of the catalogue and postcards.  What else?  Earlier this week was the Italian conference on Digital Innovation.  These are just things off the top of my head but across SL there are many stories like this I am sure.

Now combine this with the ability for guests to come into SL without having to download the client and the walled garden may be a thing of the past in a few years. If I now have a RL show with Bryn Oh then I will need a way for people to come see it without having to download SL. Not for the people who come to the RL gallery because really opening night numbers are fairly insignificant. A good opening for an artist is generally 40-80 people coming and god forbid you have a tornado on the night of your opening as I did last year, and the year before that? a snow storm. A gallery doesn't care if your big opening night was ruined by these types of things, they wont actually even remember. It comes down to sales, you have an opening night where you hope people buy, then after opening you have a trickle of people over the course of the month you show, with hopefully a few more sales. Then once your show is down it's another year of trickle sales until your next show. In one day on this blog alone I get more people than a typical gallery opening (depending on the gallery). They are not restricted to being locals, and generally are genuinely interested in ones work unlike the Thursday night gallery hop to get drunk of free red wine (which is fun btw). Things are changing with traditional news media slowly dying and being replaced by legions of information wizards using blogs, facebook, twitters and so on. They are average people who generally focus on things they understand and are interested in.

Before the car peoples lives were spent in a tiny radius. Driving an hour on the highway to visit family was probably out of the question for a horse and carriage. 120 kilometeres is about an hour which is not going to happen for walking or riding a horse. Bicycle, car, plane, jet and now internet. It's not so much physical travel anymore but mind travel. And I think this type of mind travel will supplant most things.

Next time someone starts bemoaning the walled garden I think I might be done agreeing.

There is also some other news I just worked out today.  I met the director of the gallery which represents me, and after a long talk we might be removing me the RL painter from the gallery and adding Bryn Oh to take my place.  I have long said that eventually my goal was to have Bryn Oh be represented by a RL gallery as herself.. a digital character.  As far as I know the only virtual world artist represented by a RL gallery.  The gallery will have its traditional stock of flesh and blood artists and one cartoon with no connection to a rl person.  I just find that fascinating I don't know why.  It naturally sucks to have me in RL removed from the gallery as I need that financially, but hopefully I will find another gallery to show my work.  The thing is that Bryn Oh must remain anonymous and so that's how it has to be.

So hopefully sometime next year Bryn will have a show at the gallery and it will be a combination of my machinima, maybe projectors allowing the viewers to go through my SL builds and I will also put in my encaustic music box insects which you can see here...

So I can't really commit to Bryn Oh more than that :)  It's either a catastrophic mistake to remove me in RL and switch to Bryn or it might get Bryn closer still to being in art history books because she will now be officially represented in RL (provided I can work out a good way to exhibit with her).  And wouldn't that be cool. I already know students study bryn in art schools somewhere because the students often come up to me in SL and say they just did a class on Bryn.   Another good thing is that I can now sell my paintings privately without giving half to the gallery.  So if you are looking for a painting ....

Ceorl said…
Exciting news Bryn, and I am sure you will do very well in RL. Of course, Bryn is very real, no less so because her typist's real name, or eye color, or blood type are unknown. She is just another facet.

Part of the fascination you speak of, at least for me, comes from the fact that we all come to the virtual world as equals and unknowns. Without titles, or degrees, or rank or histories.

We define ourselves by what we do, what we make, how we behave and who we associate with. We become someone. If we become people we like, what a validation that is of our characters, abilities, and personalities.
December 10, 2010 at 9:23 PM

Anonymous said…
When the RL artist needs help after being wiped out by Bryn, let it call me. Maybe we can set up a selfhelp group for abandonned human entities.
December 11, 2010 at 6:36 AM

Bryn Oh said…
I have a feeling that group would fill up pretty quickly.

Thanks Ceorl I agree but I think to believe in the puppet we must not be able to see the puppeteer.
December 11, 2010 at 7:13 AM

Semaj said…
first i disagree with everything you said (except the get drunk free part) because second what good is it with bryn groupies blowing smoke up your cartoon bum and third i lied about disagreeing with you (but not about the get drunk free part) which in fact i shouldn’t have done before rambling here but it’s your fault because you dipped your art claws in crack before mind traveling as you say and sticking them in my brain and isn’t it wondrous to be high on art, “mind travel” as you say is what makes us human, thinking itself is mind travel, so is reading, singing, the rest is just so much body stuff -eat, breath, shit, run, dance, sex – yet don’t misunderstand the body stuff can be joyous, but the mind stuff is what makes this animal machine I think something more than animal.. my impression is that 99.9% of the “mind travel” you reference ie blogs, twits, twats, whatever, tv, books, tire porn mags and sl for the most part are garbage, but to each his own, one woman’s love of mongoloian throat singing is another man’s idea of frogs in heat, again this is all your fault that I’m adding to the garbage and detracting from your insightful comments because well you know… or don’t… over and.. hopefully not out for a long long time.. and anyway… bryn (not you) should also get into the shoe/t –shirt/ whatever scene to splatter her digital self all over the damn rl world, and maybe make some scratch for her rl mother.. put that bitch to work, (not you) and don’t take offence but it really is time that she start paying her way.. and also, flash forward, you should think about having a fellow artist take over the bryn gig when we’re all dead and gone, kinda like a dear abby advice column but way cooler of course being that she’ a digital pioneer, shit, maybe she will be “mind traveling” to other planets by then… gotta think big, told you I wasn’t out yet…
December 13, 2010 at 6:06 PM

Anonymous said…
We define Cheapest wow goldourselves by what we all do, what we help make, how you react as well as which we associate with. We become an individual. As we turn out to be individuals we love, exactly what a affirmation that's
Cheapest Diablo 3 gold in our heroes, abilities, and also personas.
August 14, 2012 at 4:38 AM