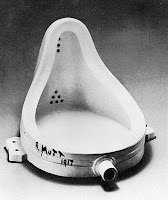 10 - "White Noise"
by Mosman Hax
This was perhaps the most difficult choice for my top ten picks.  And that is mainly because it references whole movements and concepts from art history in the "real world", and I personally like things made for the virtual world that are looking to create new concepts unique to this medium.  So lets look back at how White Noise connects to the art concepts from the past and how it might fit into Second Life.

Art history stretches across time and periodically we have people who change the way we see art and even how we define it.  Technical skills in colour theory, composition, anatomy etc all progressed to towering peaks of achievement.  Some artists rose to the top who were one of a kind talents with skills that could not be matched.  There was a definable measuring stick to understanding and appreciating art.  In 1917 Marcel Duchamp submitted "Fountain" (which is the the urinal above) to a New York show.  He took an everyday object and designated it as a work of art, simply because he as an "artist" submitted it.  He wanted to have the viewer look past its purpose as a urinal and see it for its design elements.  It was scorned yet influenced many artists since that time.  Some even say that much of the art of today lacks concept, beauty, technique and overall finish as a result of Duchamp.  For example, an elephant at my local zoo smeared paint on a canvas using its trunk to hold the brush.  The paintings are called art and were sold. Everything is now art and as a result the term "art" has lost all its meaning.

People such as Andy Warhol played with the idea of taking both a very recognizable image (Marilyn Monroe) and through repetition desensitized the viewer to its loaded image.  Or conversely he took everyday items (Campbell soup cans) and turned them into something special beyond how we normally perceive them.  The act of using the cans in the piece made them "art".  Mosmax Hax's work "White noise" plays on these concepts.  He takes ready made / found objects from Second Life and places them in an environment where they lose their identity and purpose.  However, to me, it speaks a bit differently when done in Second Life.  You see, the objects he uses in the build are things which merely look like objects from real life.  The skate board is shaped to look like something we recognize from RL.  In second life it does nothing.  It contains no script and is no more rideable than prim hair.  This creates a new level to question function.  What is also interesting to me is that we are in a time when people ask as to whether what we do here in Second life is actually art.  Sadly we can call the work of an elephant art, yet people still fear to embrace this medium.  That's fine.  With the Daguerrotype came photography and it was dismissed as not being art.  Film arrived and it too was dismissed.  None today would question whether they are art.
So, what I kind of like, is that White Noise came into Second Life existence and just by being here is already questioned as to whether its art.  But it also models itself under the found art / ready made art movement which itself was dismissed as not being art.  So I guess I will sum it up this way.   If white noise is meant to be a stand alone build based off the ready made movement from first life then I like it, but it would not have made my top ten.  If it is, on the other hand, meant to play on the new concepts of what second life art is as a medium, then I like it even more and its my ten for 2009.
Email Post

Semaj said…
a rambling all hail hell bent for hades discourse on defining art, see impossible, yes there is context, some back story to all processes and products of creation, this talk these words, definitions, theories, schools of thought, text and blogs like all forms of expression are partly metaphorical grooming and solace for we sad and lonely monkeys lost in the conscious gaze of reflective existence, define art, it’s like taking the brush from the elephant and painting the word elephant on his hide as if the word could convey elephant, define art, it’s as easy as answering where we came from who are and why the fuck are we here, define art, art is a suckling mind-mouth stoned creative from the fecund milk of imaginations engorged teat, art is senseless, random and cruel art is design art is rule art is blindness art is sight art is the mind and mindlessness of man and nature and machines art is the holy grail and the hilt of the sword art is the sword and the rose art is sacred art is profane art is hello and fuck you art is the chalice the church and the way art is the bike and the toilet and the do do do dada anything i say art is a fist art is a fight art is a kiss art is a gun art is free art is for sale art is you and you are the spear tip carving in stone, the blood on the brush, the chewed charcoal pigment spit to mark a hand on the cave wall to say i was here, you have chewed the digital pigments and spit them out with clicks and scripts and have carved your new name Bryn Oh and these new worlds with bits and bytes on the wall of this electric maze and into the souls of those who have wandered into your island cave long live the goddess of immersvia
January 3, 2010 at 11:35 PM

Unknown said…
Bryn Also these Buy RS Goldbrand-new realms using chunks along with bytes within the wall structure on this electric powered network and in to the spirits of those that have came into your isle give very long GW2 Goldlive the particular goddess associated with immersvia
November 21, 2012 at 2:19 AM