The Daughter of Gears 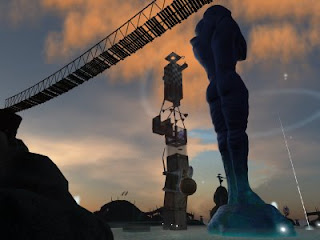 A few months ago I was approached by RightasRain Rimbauld to build something for Black Swan sim. Black Swan is a sim which is populated by most of the legendary builds of the artist Light Waves. It drops you at the beginning of a path that progresses through a series of traps. So when I tried to think of something for this sim I wanted to use what was already there to try and create a story. I wanted to create a narrative that would fit with the theme and maybe create a reason for the traps.
The result was a build called The Daughter of Gears. It is a story about a mother who watches as her daughter becomes sick. And as her life begins to fail she transfers her daughters soul into a vessel. A machine. When the townspeople find out what she has done they come to take the daughter. They see her as an abomination against all their beliefs and to all they hold true. But to take her daughter they must first get by her.
The mob climbs the tower and reaches the top. The mother fights them and wins. But is mortally wounded. And as she lay dying she realizes that her daughter will now live forever alone and lonely. A girl in the body of a machine in a hostile world. So the daughter of gears goes into stand-by mode like a computer. And in stand-by she dreams of her mother for eternity.
The story is made up of four poems. Each poem is found at different parts of the tower and slowly tells the story as you climb.

Skin like lace
A childs face
Eyes of cerulean blue


And here is the machinima I have just finished to tell its story.

The build can be found at Immersiva or at Black Swan

Anonymous said…
The machinima is stunning Bryn - really fabulous! And thank you for assembling the story in one place.

Anonymous said…
This is one of the most amazing things that I have ever seen portrayed through Second Life. SO well done.

One of my Japanese friends wrote about your SIM.
Please go to his blog below:

Bryn Oh said…
Ahh thanks Yabush and thank your friend for me please. My Japanese is well... nonexistent but I think he liked it!
February 15, 2009 at 6:35 PM